Here's an article about improvements at Barnes & Noble.

The article talks about the use of co-op dollars ... situations where your product supplier pays you a fee in exchange for favorable placement of their product in your stores, online, or in print.

I had first-hand experience with co-op dollars at Nordstrom. We nuked our catalog program in 2005, replacing it with a print program that focused on store merchandise that was funded with co-op dollars. I recall that we set the price at $29,000 a spread (two pages) ... enough to offset printing/paper/postage costs.

This decision caused a whole series of interesting outcomes.

Creative (look and feel of a spread) was controlled by the vendor/supplier. Making these things look cohesive was a mess. The vendor/supplier had ideas on "branding", resulting in one product on a page (instead of the 5-6 that optimized sales/profit). What one vendor/supplier thought was "brand appropriate" was completely different than what another vendor/supplier thought was "brand appropriate". As a result, the catalogs looked like garbage ... now, having said that, the marketing/creative folks thought the catalogs looked "great" compared to the high-density catalogs we previously sent with merchandise optimized for catalog performance.

Taking all of these co-op dollars resulted in catalogs that performed 60% to 80% worse (yeah, worse) on a sales-per-square-inch basis. Woo-boy. If you want to watch catalog professionals melt-down in real time, imagine them trying to convince anybody that this was a bad thing ... because outside of about eleven catalog professionals, everybody was happy with all of those co-op dollars funding everything. "We saved $1.4 million, look at how that helps us exceed our budget goals" was something I heard weekly.

The analytically-minded professional might interject at this point and ask somebody to run a profit-and-loss statement. Good idea! 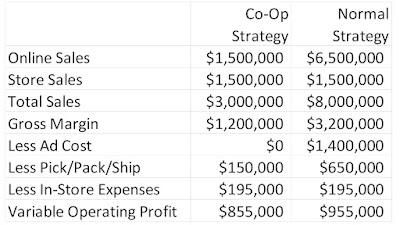 In this example, the normal catalog strategy generated $100,000 more profit. There were plenty of cases where the opposite happened. Each strategy yielded the same amount of profit over time.

Let me tell ya, this was INFURIATING!!

Catalog professionals love analyzing and optimizing - the co-op strategy eliminated all of that. The catalogs were equally profitable, we were forced to mail 2,000,000 names to please vendors/suppliers, and vendors/suppliers paid for the ad-cost, eliminating all analysis. There were two things we could still do.

But again, why did anything matter when vendor/supplier co-op dollars funded the ad-cost, causing profit to be about equal?
My catalog circulation analysts and professionals quickly became disenchanted ... they left the company or moved to different departments to do anything that wasn't traditional catalog-analysis related. Our inventory people quit ... their square inch analyses were pointless given they weren't helping decide what went into the catalog and frequently weren't told what went into the catalog until it was too late to do anything about it. Some of our merchants left the company ... their jobs were essentially outsourced to vendors/suppliers and were largely assumed by retail merchants (and that was an acceptable outcome from an integration standpoint - if you believe in the failed omnichannel thesis, it was "proof" you were right).
And without all of the work required to truly analyze and optimize a catalog program, my job became irrelevant. I'd be ousted from my job within eighteen months ... and I can assure you that Nordstrom did just fine without me in the mix.
So the Barnes & Noble analysis above takes us full-circle ... we hear a story about treating the store like it is your store, maximizing productivity even if it means that each store is individualized and personalized as a consequence (i.e. deviating from the failed omnichannel thesis of same everything at every store and online), and not being beholden to your suppliers.
My opinion only - there are a lot of optimization experts in retail and e-commerce ... and these experts are dying for an opportunity to run their business independent of Digital Omnichannelism. All it takes is a good crisis to provide that opportunity.