Allow me to show you what is happening to too many of you. Let's pretend you run a really small business.

As of 2/28/2020, you might have possessed the following customer metrics.

Then the COVID-bump happens. Things go bonkers.
We think life is good ... other than the dying part and the illness part and the pointless hatred for each other because of political beliefs. Otherwise, life is/was good. Until life wasn't good. Until prices started to increase in late 2021. Until new/reactivated buyer counts began to fade. As of today, our data looks like this.
Our little business, which had $13,200 in sales two years ago and $16,740 a year ago now has $14,014 in sales. Better than two years ago, but oh oh. And our little business had 100 buyers, then 90 buyers, then we improved to 120 buyers, and now we have 86 buyers. We've lost all of our file power, haven't we? File power is important, because next year's sales are connected to how many customers we have at the end of this year.
Worse, our rebuy rates are impacted by rising prices ... down to 24%. New/Reactivated buyer counts were at 60 two years ago, then 90 COVID-infused newbies a year ago, then just 55 due to the price increase.
Now we have to forecast what happens in the next year. Well, prices are much higher, so we'll forecast a 24% rebuy rate, $230 spend per repurchaser, just 45 new/reactivated buyers, and $140 sales per new/reactivated buyer. Fewer customers, but more spend per customer.
What does the next year look like?
This is what the end of the COVID-bump combined with an increase in prices means.
Sales by year:
Tell me what happens when we get to October and the forecast becomes reality?
Many e-commerce brands will be able to outrun this forecast ... they'll find ways to generate new customers, as they have for the past twenty years.
Many traditional catalog brands will not be able to outrun this forecast. By not developing sufficient online marketing capabilities, the contraction currently being observed will be amplified by a lack of paper. The very vendors demanding that catalogers mail paper instead of embracing online marketing will hasten this dynamic.
This blog post is a warning. There is time to do something about what is coming. Expense increases paired with sales declines = trouble.
Trouble.
I've spent much of the past eight years advocating for strong customer acquisition programs. Fall/Winter 2022 will belong to those who have a strong customer acquisition program.
You are a Leader. You have time to address this challenge. Be a Leader.
P.S.:  If you need forecasting help, let me know (kevinh@minethatdata.com).
- June 23, 2022 No comments:

Here is the GPA for each of the past five years for a category that is struggling.

Yup - that's a category that is dying. An average GPA is 2.00, so this category has been below-average for five years and performance is getting progressively worse.
If you are a marketer, you need to know this is happening, so that when you are asked to feature this category you adjust your sales plan accordingly, right?
- June 22, 2022 No comments:

The Marketer Influences The Customer

For one company, I looked at the GPA of the merchandise purchased by customer based on customer life stage ... for all new customers acquired in the past two years. Ready?

Look at the "Below Average" column ... on a first order, 25.9% of the merchandise is priced below the historical average for the item. For loyal customers? 82.3%. This brand is discounting the living daylights out of the stuff they sell to the most loyal buyers.

It would take a LOT of discounted purchasing to overcome the damage this marketer is doing to this business.

Yes, the marketer influences the customer.

Evolution of New Items - The GPA

Notice the seasonality in sales ... March/April/May are peak sales months for these items. The items build into healthy sales status through the remainder of 2019. Then in 2020 the items begin to slump, and the slump significant in 2021 with the notable exception of the March/April/May timeframe where the GPA's increase.
Let's look at March/April/May performance.

Two years after the items were introduced sales are cut in half, but the GPA is noticeably higher.
In other words, the merchandising team (predictably) culled out the losing items, focusing only on the items that have success.
This is standard behavior ... of course.
But it brings up an interesting thought. If sales continue to decline from items from the Class of February 2019, you need new items to replace the sales being lost, correct?
The best companies I work with are gifted at constantly introducing new items that sell well enough to replace the items that are always dying off.
- June 19, 2022 No comments:

Asleep At The Wheel

Here's the four-year trend for new item introductions for a brand. The arrow tells you where the problem resides. 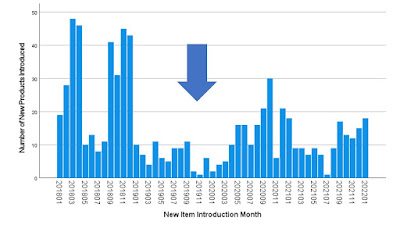 In 2018 the brand introduced new items at a thrilling clip ... now, that isn't always right either, especially if none of the items become winners. However, what happens in 2019 borders on being grounds for dismissal with cause. Average monthly new items per year look like this:
We don't need a lot of reporting to help us. We just need the "right" reporting. And if your merchandising/product team won't produce the reporting, well, then it is your job to produce the reports.
When you have a year where your merchandising/product team is asleep at the wheel, you have subsequent years where the marketing team suffers because the failure to develop new items ripples through the future, causing customers to spend less. That's not the fault of the marketing team.

They Don't Work In Lock-Step

Alright, it's becoming clear I have to focus more on merchandise tactics and analysis, because those are the questions that are coming into the Global Headquarters at MineThatData.
There's a misconception out there ... when business is bad, some business leaders believe there is a smoking gun that can be readily fixed ... if some math person would just write some code and identify the problem. It's always fun to have an EVP making $475,000 a year with a $400,000 annual bonus not know why business is failing but expect a 24 year old to write sixty lines of code and solve the problem.
Sometimes there are feedback loops. Sometimes it isn't easy to identify the problem. Sometimes you have to realize that there is some cause-and-effect going on.
Case in point. This brand is failing. In the graph below, I plot year-over-year change in sales for new merchandise, and I plot year-over-year change in new/reactivated customers. These are two metrics that do a good job of deciphering what is going on, and are "predictive" in that problems in these metrics today yield problems in the business tomorrow. Here's the graph. 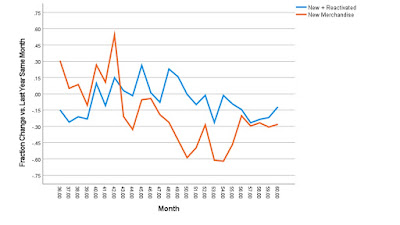 Each month is coded in the database, with "60" being recent and "36" being two years ago. That's your x-axis.
Let's look at change in sales of New Merchandise first (the orange line). Two years ago sales, year-over-year, were positive. Customers liked what was being offered. And then, somebody on the merchandising team decided to muck everything up. At month=43 sales of new items crashed, and they have not recovered in the seventeen months since. This often happens when new merchandising/product leadership take over, but in this case, I know that the brand made a conscious choice to focus heavily on the long-term best selling items. It's a conscious choice that also turned out to be a bad choice, because when you don't develop new items today your sales decline tomorrow.
Meanwhile, the blue line is the year-over-year change in new/reactivated customers. At about month=42 the trend turned positive. New/Reactivated customers thrived for about nine months, before turning negative and thus creating a problem for this brand.
Two leading indicators of future sales success ... new items ... new/reactivated customers ... both trending negative.
Now, in this case, the brand had six months of lousy merchandise performance (due to new item failures), so the CFO decided to tell the marketing department to cut back on marketing spend ... and guess what? That was also a bad decision!
The metrics don't move in lock-step ... but there is cause and effect. Management decided to focus on long-term winning items while de-emphasizing new items, causing the business to struggle, causing the CFO to tell marketing to spend less, causing fewer new/reactivated customers, setting up a horrible second half of 2022.
Yup - humans caused the problem. The people running the business caused the problem. If they want the business fixed, they need to look in the mirror.
- June 14, 2022 No comments:

Incoming messages from Professionals on Twitter are centered around interrelated issues (and it is interesting that this is happening on Twitter - it means this is something younger professionals in e-commerce are running into):

So, let's create a mini-project, as we've done so often in the past. Send me five years of purchase transactions and for $7,000 I'll forecast the rest of the year and next year as well. We'll see where you are headed and see what kind of "downside" there is if things get worse.
Contact me now (kevinh@minethatdata.com) ... I'll take four (4) projects at this price. Get in line now. Project work will begin on July 1.
- June 13, 2022 No comments: