That's what you are reading these days ... the pundits enjoy lauding "digitally native" brands for opening stores. "It's proof positive that retail matters and that an omnichannel approach is a smart bet in a confusing customer landscape".

If you've ever worked in retail, you know that when you open a store a cascading series of events happens, resulting in the store not performing at the level your reporting tells you it performs at.

Here's what happens, especially when you already have a store in a market. 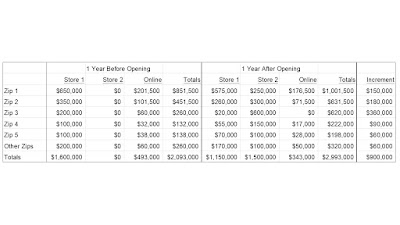 Let's evaluate what happened.
Before the store opening, the original store did $1.6 million in sales.
After the store opens, the original store now does $1.15 million in sales.
Oops.
Before the store opening, online sales were $493,000.
After the store opening, online sales were $343,000.
The new store does $1,500,000 in sales ... it looks like a huge success, now outperforming the original sale. Somebody will say that a renovated store, with modern/clean presentation outperforms the tired old store. That somebody "might" be right. That somebody "likely" is wrong.
Look at incremental sales ... instead of generating $1,500,000, the new store truly added $900,000 in sales to the market. Not $1,500,000. The store is 60% incremental, with 40% being cannibalized from other stores/online.
Your job is to run a p&l on the $900,000 total, not the $1,500,000 that is reported on your company dashboards. Hint - that's not going to be a pleasant exercise.
Pundits love it when you open stores.
Run a p&l on incremental sales to see if the pundits are right.