Somebody Made a Bad Decision 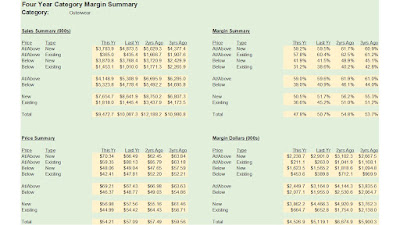 The category is dying, isn't it?

There's a secret to the poor performance ... look at sales of existing items by year.

Let's also look at margin percentage for existing items by year.
To me, it looks like the Outerwear merchant made a bad, bad decision. It's like s/he decided to throw away the existing assortment ... discounting the living daylights out of what was left. However, whatever was newly introduced didn't resonate with the customer (sales of new merchandise increased two years ago and then held flat and are now in decline). This happened two years ago, and the results have not been positive. Well, they weren't bad for a year.
We can see the problem in the upper-left portion of the table. Look at annual sales of existing items selling at/above their historical average ... $1.9 million to $1.7 million to $0.4 million to $0.4 million. The merchant just stopped selling existing items at full price. S/he clearly discontinued existing items.
Now look at the bottom right portion of the table ... total margin dollars by year ... from $5.9 million to $6.7 million to $5.1 million to $4.5 million. The merchant made a bad decision ... one that worked for a year and has now caused damage to the category.
This kind of stuff is happening at your company, too. This kind of stuff hurts conversion rates, hurts email click-through rates, hurts your cost per order in search. It hurts you, the marketer. You don't want to be accountable for stuff the merchant causes.
That's why you have to analyze your business in this manner, correct?