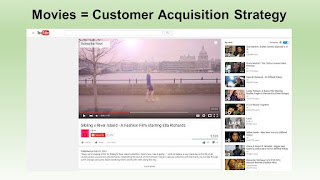 River Island partners with a production company to create mini-movies that feature River Island merchandise being worn by the bloggers who "act" in the movie.

When you look at this production company, you frequently observe videos that have been watched more than a million times.

I know, I know. Nobody wants to watch a movie about widgets. You think this stuff only works for fashion brands. You tried creating a video with a flip phone in 2006 and only 98 people watched it.

This video appeared on the River Island blog, and on YouTube. And unlike your email campaign that has a life of eight hours, if done well, a video sits out there doing hard work for months or longer.

Ok, you're never going to follow this advice. Fine. Tomorrow, I will show you how a competing brand leveraged the work done by River Island.
- March 29, 2016