One of the most interesting aspects of marketing, unique largely to catalog and email marketing, is the concept of cannibalization.

Simply put, when you fail to market during one timeframe, you lose sales, but sales also shift into other timeframes.

Take a look at this: 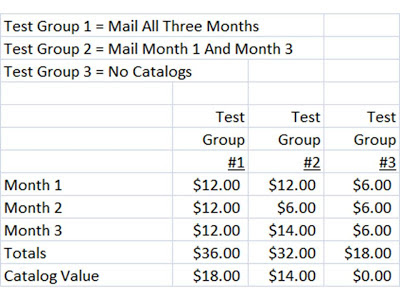 Similarly, when catalogs are not mailed at all, customers still spend 50% of the demand they would have spent otherwise (this is known as the "organic percentage").

Look at the last row ... send 0 catalogs, get $0 of catalog-attributed demand.  Send 2 catalogs, and you don't get $12 (as one might expect), instead, you get $14.  This is a classic case of catalogs cannibalizing each other.

Twenty or more years ago, when I worked at Lands' End, we measured the living daylights out of cannibalization.  Twenty years later, you're hard-pressed to find a cataloger who understands cannibalization.

Execute a test and measure it for yourself.  You'll be fascinated by what you learn.

Want to implement cannibalization findings into your business?  Contact me (click here) for your Catalog/Email PhD Project.
- March 31, 2013