In January 2000, I prepared a presentation for the marketing management teams at Eddie Bauer and Spiegel (our parent company). Our annual online demand totals for the prior three years were as follows:

In my presentation, I described a future where, by 2003, the online channel would represent the primary way that customers shop from a direct-to-consumer brand.

In October 2009, I presented similar concepts to a Catalog Marketing Executive. Nearly ten years had passed since my Spiegel presentation. This Executive heard my presentation, and like so many in the catalog industry in the past ten years, rejected the thesis that catalog marketing needed to evolve in response to a world increasingly dominated by online marketing. This Executive suggested that improved targeting strategies would result in a robust catalog business, not an acceptance of online marketing strategies.

The decade started with the concept that the online channel was nothing more than "free candy", as the woman said in the Seinfeld episode where George attempted a Twix candy lineup.

This concept of "free candy" permeated the decade, and in so many ways, caused us to not fully capitalize on the potential of the online channel. The decade featured a series of pundits promising free candy if folks just did search engine optimization, e-mail marketing, employee blogging, mobile marketing via iPhone apps, a Twitter presence, or went deep into debt to open stores so that customers could buy merchandise online and pickup it up in a store in a flurry of bricks-'n-clicks excellence.

Overwhelmingly, on a tactic-by-tactic basis, the pundits were wrong. Horribly wrong. Unaccountably wrong.

And this level of error caused so many catalog marketers to feel burned. The catalog executive knew that a catalog delivered $3.50 per catalog mailed, even in a declining environment. What does the employee blog deliver, if anything? Tactic after tactic failed to be as effective as the old catalog. New tactics failed to scale, causing catalog executives to further dig their heels in.

The strongest companies I work with are like a well-designed mutual fund. They execute a ton of micro-channel strategies, none of which dominate total net sales. The strongest companies that I work with actively test all new micro-channels, but never expect any new micro-channel to contribute net sales in a meaningful way for a long time. These companies can prove the raw inaccuracy of matchback analytics via well-designed mail and holdout tests across catalogs and e-mail marketing. These companies love the art of selling merchandise more than they love the craft of cataloging.

Then there are catalog companies that are struggling. They cling to the hope of catalog marketing being the primary sales generator. They can prove that 80% of total sales are driven by a catalog, based on their matchback analytics. They deride paid search, e-mail marketing, social media, mobile marketing, seo, pay-per-click, affiliate marketing, and any other online endeavor as being a waste of time that results in a pittance of the sales driven by a traditional catalog --- and heck, the catalog caused sales to happen in those micro-channels, so why not just focus on the catalog? These companies love the craft of cataloging more than they love the art of selling merchandise.

And in the new decade, "Free Candy" will become an even bigger problem. A ton of experts will tell you that your HTC Droid phone is the secret to billions in profit, or that Hologram Marketing is the next big wave in customer preference. They will tell you to abandon profitable old-school strategies. They want for you to take risks. They won't be accountable for your failures, they'll suggest you failed to execute their vision correctly.

In the next decade, our job is to "sample free candy". We don't overeat, like the pundits suggest. And we don't starve ourselves, returning to our roots --- we won't be in business in 2019 if we do that.

As always, I am here to help you work through this transition.

Last week we talked about the attributes that customers possess after a first order. Those attributes separate customers who are unlikely to... 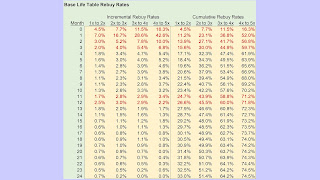