It's a lot easier in Sports to see how strategy evolves over time than it is to see how strategy evolves in Business. Sports is measured in terms of wins, losses, and Championships. As a consequence, good strategies tend to be moved into the future, where they are evolved. In business, some of the best strategies I've seen are buried in small businesses that never evolve or change, and as a consequence those strategies never see the light of day.

This brings me to the story of Virgil Carter. Virgil was a Statistics Major at BYU, and he was a good college Quarterback. In the NFL, Mr. Carter had a weak arm, so the Cincinnati Bengals had to develop an offense that would suit what he did well (he released the ball quickly and was an accurate thrower). Who was his offensive coordinator? Well, it was none other than Bill Walsh, who won multiple Super Bowls with the San Francisco 49ers in the 1980s. Bill Walsh developed what became known as the "West Coast Offense" to suit Mr. Carter's skills, then evolved the offense to a comprehensive "system" for running a football organization. Heck, Mr. Walsh wrote a book with a limited number of copies on how to run a football organization. I bought one of the copies on eBay for $$$ ... if you carefully look at the bookshelf of any NFL coach, you might just see one of the copies. 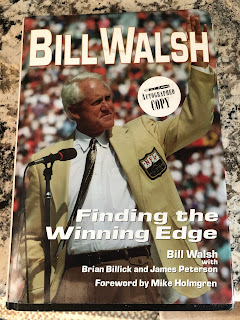 Back to Virgil Carter.

Remember when I told you that Mr. Carter was a statistician? Well, it turns out that Mr. Carter also contributed to the future of football by analyzing the outcome of plays (click here). He learned how many expected points you would generate if you took over possession of the ball at your own 33 yard line, for instance.

So Virgil Carter played two key roles in the evolution of football.

By next September - November, a vaccine will be prevalent enough to help us return to a "new normal".
And when that happens, the next "Virgil Carter" will have spent the prior year developing a methodology for how to adapt a business in a post-COVID world. That person will have an enormous head start over everybody else ... a huge competitive advantage that will be difficult to overcome.
Why can't that person be you?
- November 23, 2020