One of the jobs of a Virtual Chief Performance Officer is to teach the concept of "variability" to employees ... and especially Executives.

In business, things don't happen on a predictable basis. There is always noise. ALWAYS! The real world is noisy too ... look at polling errors (again) associated with the Election.

Let's conduct a little experiment here. I ran 30 samples from this audience. I randomly sampled 25% of the customers in this audience, measured the average spend in the next month, and then plotted a histogram of the distribution. Here is the histogram. 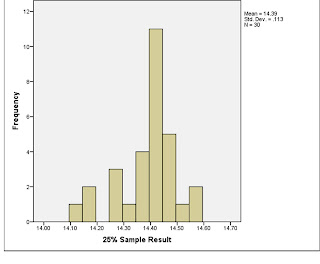 Most of the results are "similar" to an average of $14.42 ... but aren't exactly $14.42, are they? This is the definition of "sampling error". We sample from the original population, but the results don't end up EXACTLY like the original population. We have differences.
A Professional has to be able to deal with these differences. You will never know if the actual result ($14.42) actually happens. Sometimes you take a sample and you get $14.20 ... it's technically the same as $14.42 because it is drawn from the same population, but the observed outcome IS NOT THE SAME and you cannot ever know that it is not the same.
In this case the standard deviation is 0.113 ... so you can expect most of your results to vary by between +/- $0.23. If you get a result of $14.20 ... it might actually be $13.97 or it might actually be $14.43 (remember, the actual observed outcome was $14.42) and you don't know what direction your estimate is off by.
Tomorrow I'll show you what happens when you only sample 5% of the population instead of 25%.