Remember yesterday, when I shared that something you pencil out in a spreadsheet as a "good decision" is actually a decision that has risk? In my example, what appeared to be a profitable decision actually had a 23% chance of being unprofitable. 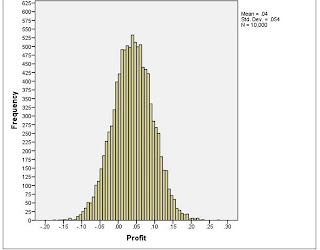 I worked for a person who took a few stat classes in college and therefore thought he was a brilliant statistician. When I communicated risk to him, he got uncomfortable, then he got angry, then he misinterpreted what he learned in his three stat courses, then he said things that were completely wrong but said them as if he were right so anybody in his orbit took his side, causing everybody in the room to be wrong.

What did he misunderstand about risk?

He believed that the "average" outcome was a "certain" outcome.

And if actual results came in "below average", well, that was your fault.

And if actual results came in "above average", well, that was because the merchant was brilliant.

I learned to NEVER communicate a probability to this person, because this person was incapable of understanding probabilities. He'd have been a terrible Texas Hold 'em player and a really sore loser if he had to deal with a "bad beat" on the river.

Instead, I sandbagged everything.

I never submitted a business plan assuming an "average" outcome. I'd calculate the probability of a less-than-optimal outcomes, then submit a less-than-optimal outcome. Business would then "hopefully" perform at an average level, in which case my plan would be exceeded, and everybody would be happy ... including my boss who didn't (couldn't) understand probability and risk.

It's awfully hard to properly communicate risk to individuals who struggle with assessing risk. Come up with a strategy that mitigates the downside while promoting an upside that makes people happy.