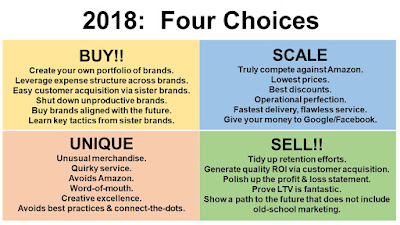 This is the second choice, and it is the choice we're all failing at.

We're witnessing the end of a thirty year run known as e-commerce. From 1995 - 2002, it was all about startups ... we marveled at companies as they sprung up out of nowhere and produced television commercials featuring sock puppets.

From 2002 - 2009 it was all about existing companies building out their e-commerce infrastructure.

From 2009 - 2016 it was all about "omnichannel" and "social" and "mobile". This was a period of transformation, as the existing e-commerce business model changes (social / mobile for younger companies ... omnichannel for existing companies). We learned that neither direction worked terribly well for most ... and during this time of investment and transformation Amazon took over and dominated.

From 2016 - 2023 it's a period of "Scale". In old-school terms, the word is "Consolidation". The race is heading toward a handful of huge winners and everybody else loses. This has been the 25 year pattern of the internet ... a handful of winners and a mass of companies losing steam coupled with a ton of tiny winners in a niche. The mass of companies losing steam will pick up - you know this is happening by watching all of the acquisition among e-commerce brands ... easy customer acquisition has ended and the founders are looking for their final payday.

If you want to fight in this quadrant, be prepared to sell your soul.