There are forty of them now, plus a championship game. 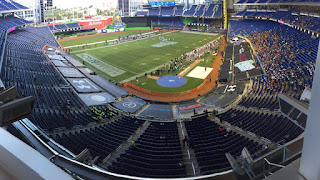 Many of the games feature lousy teams ... 6-6 teams play 5-7 teams. The bowl games pay each University a modest sum that is then re-distributed to the Conference the team belongs to, and in kind, each University is required to purchase thousands of tickets.

Not many fans attend most of these games ... the stadiums are 60% empty. Or worse.

A corporate sponsor hops on board and pays a few million dollars to make the whole thing work, hoping to gain enough exposure on ESPN and at the stadium to generate a return on investment.

In fact, a third of the games are confections of ESPN - created by and owned by the network to generate ad revenue for ESPN.

For most bowl games to survive, then, they must generate revenue outside of ticket sales. The ESPN-owned bowl game survives (in theory) because of television revenue, not ticket sales.

Which brings me to your business. If you are wrapping up a tidy Q4 filled with 40% off promotions, you are like the Bowl Games I mentioned earlier. You are using cheap tickets as your way to fill your stadium.

What are other ways to generate revenue, assuming nobody wants to sit in your stadium (i.e. nobody wants your merchandise even at 40% off)?
- December 27, 2016