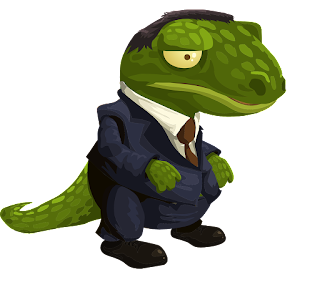 In my upcoming presentation on Customer Acquisition, I open with a discussion of what is called "Lizard Logic".

I first heard the term working at Lands' End in the early 1990s. My boss, Dave Johnson, used the term to discount comments that sounded logical but were, in fact, bad for business.

I was reminded of Lizard Logic when I read an article yesterday about measuring the return on investment of an emoji (this article was the top story in an email newsletter distributed by a trade organization that is there to look out for your best interests). The author stated that this was a "very important issue" for "brands".

You are constantly being pummeled by Lizard Logic.

You are told that it is more important to generate engagement than to generate sales and profit. That's Lizard Logic.

You are told to follow Macy's and become an omnichannel brand because the customer "demands it". Thanks, Woodside Research, but that's Lizard Logic. Macy's followed the logic and is now in free fall, closing stores, laying off thousands of employees who carried out your strategy. These folks lost their jobs because Management listened to Lizard Logic.

You attend your favorite conference ... and the speaker is from a reputable vendor ... but the vendor paid $20,000 in sponsorship fees to earn the right to get one hour in front of five hundred attendees ... sharing a message that benefits the vendor and generates sales for the vendor. That's Lizard Logic. The conference earns $. The vendor pays $ in order to get access to an audience that will pay the vendor $. You end up paying money to hear a biased message.

When somebody tells you that it costs nine times more to acquire a new customer than it costs to retain an existing customer, that's Lizard Logic. Say you retain 37% of last year's buyer file, as is the average across my client base. What do you do in two years when only 15% of your file is still buying merchandise? How expensive will it be to squeeze nine times the sales out of this audience to keep your business growing? Eventually, you have to get $50,000,000 out of two customers. Good luck following the Lizard Logic.

You are being pummeled by Lizard Logic on a daily basis. Almost all of it is designed to get you to do things that benefit those who share Lizard Logic.

E-Commerce In A Box Breach: Magento

Click here, folks .  You cannot criticize these breaches, because the minute you do that somebody hacks you and then what? Try your best to ...