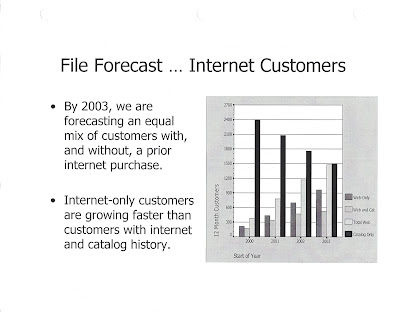 It's January 2000. I was invited to a meeting about the future of the catalog business at Eddie Bauer / Spiegel / Newport News. Lot's of VPs. VPs from Spiegel, our parent company.

I was a Director at the time ... the worst job title in corporate America. Trapped below a Vice President and above a handful of Managers, the Director is frequently paralyzed ... no budget to make changes ... no authority to make changes ... required to sell Executive changes to Managers.

So there I was, with my VP and his VP in the room, presenting to other VPs from other companies. I shared the slide above ... I predicted that by 2003, the online channel would surpass the "catalog" channel (i.e. phone) and at that point, the business would be fundamentally changed. I told the room that we had three years to craft a reasonable strategic direction. I also reminded the room that this change in customer behavior was unavoidable ... we were going to be swallowed up by the internet.

It was at this point that the meeting turned ... it turned back toward the "catalog".
I specifically remember a handful of Spiegel executives who were laughing ... "this isn't the way the world works". As they laughed and found every possible reason why the slide was incorrect, I noticed that the room aligned with "the laughers". It's hard to blame folks for aligning with them ... they're the ones paying the bills.

Three years later, at the time when I forecast the catalog/online trajectory to switch, Spiegel filed for Chapter Eleven protection. In 2012, Wikipedia tells us that Spiegel, after being sold several times, elected to focus on "digital media".

A similar transition is happening, right now, in e-commerce. E-commerce is going to be swallowed-up by mobile. It's unavoidable. Now, if your customer is 63 years old, then no, e-commerce isn't going to be swallowed up. But if your customer is 36 years old, then yes, your e-commerce division is already being swallowed up. You can't get away from this dynamic. I analyze businesses where the dynamic is self-evident. The signatures of the catalog-to-e-commerce transition are similar.

Today, you might be the Executive. You might have a Director, in her mid-30s, and she is trying to tell you what is coming. You don't like what's coming, do you? You built an entire career on how e-commerce functions, and now the rules are changing. That hot-shot Director in her mid-30s has ideas for what you need to do in the future. Those ideas are contrary to your instincts.

Say you disagree. That's the likely scenario - read anything out there, and folks will tell you that mobile is an extension of e-commerce and they'll tell you that mobile isn't going to swallow up your business (and it won't if your customer is 63 years old, you have a different set of challenges). If you disagree, is it necessary to badger the young professional in her mid-30s, a person who sees the world different than you see it? Is it necessary to question each assumption she made? Is it necessary to badger her publicly in meetings?

The next five years are going to be really interesting in e-commerce and retail. The catalog-to-e-commerce transition is coming to e-commerce via mobile. We get to decide if we embrace the transition, or if we will fight it in the same way Spiegel fought it sixteen years ago.