Major Catalog Trend - The Life of a Catalog is Shrinking 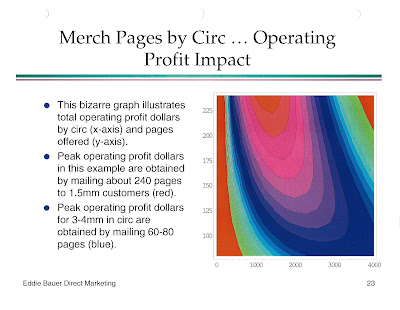 FYI - we're going to talk about catalogs for the next six posts - if this is not your cup of tea, no worries. If your career depends upon profitable management of a catalog marketing program at a traditional catalog brand, well, buckle up!!

I was passionate about the topic because something interesting was happening.

Worse, the sales we'd obtain from the catalog in weeks 2-9 were less than we'd historically measured. Weeks 0-1 seemed ok, then the catalog would sort of die off.

When this happened, the dynamics of a catalog business changed.
When the life of a catalog shrinks, the catalog becomes less productive.

When a catalog becomes less productive, you have to make one of two choices.
Now - read what Bill LaPierre had to say a while back (click here). Go down to the "changing patterns" paragraph. Read that paragraph.

I get to analyze a lot of mail/holdout tests. I measure the incremental demand generated by a mailing, by week. Over the past two years, there is a clear dynamic at play:
This is one of the reasons why your co-op names are not performing well. You used to generate $1.30 per catalog ... but now the tail is being cut off catalogs, shortening the realistic life of the catalog down to 2-4 weeks, in so many cases. This lowers the dollar-per-book down to $1.10 or $1.00 (or $0.50 for many of you) on co-op catalogs.

Again. Go look at the incremental difference between your mailed group and your holdout group. This tells you what the realistic life of a catalog is. In many cases, the life of a catalog is down to 2-4 weeks. Look at your matchback results for co-op names, and you'll observe similar trends.

Now, if your customer is 70+ years old, this doesn't really apply to you - the rules of modern marketing do not apply to you.

When the life of a catalog shrinks, page counts shrink - they have to shrink in order to maintain circulation depth.

In the next five posts, I'll describe which of four paths a cataloger is likely to take, in response to a shrinking life of a catalog.
- December 27, 2015

Back to our table format studied this week. This time, each product / customer combination measures gross margin percentage. The green cells... 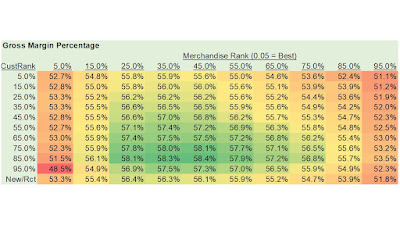