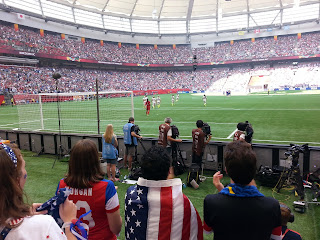 Last week, the United States defeated Japan by a score of 5-2, earning the title in the FIFA Women's World Cup up in Vancouver.

What does this have to do with Merchandise Productivity?

It turns out that this was a very good team (i.e. great merchandise). But the television ratings (i.e. sales) weren't very good at first, were they? They weren't bad. A couple million people watched the first game, a win vs. Australia. Then more people watched a 0-0 draw vs. Sweden. The audiences grew for wins vs. Nigeria, and Columbia, and China.

By the time the semifinal was played (against Germany), more than ten million people were watching.

And last Sunday, an average audience of more than 26,000,000 folks (between Fox and Telemundo) watched the United States win the title ... with more than 40,000,000 people watching at least a moment or two of the game.

Everything works when customers love the merchandise. Especially word of mouth.

Marketers greatly influence merchandise productivity, by the way. Sure, the marketer can offer 30% off plus free shipping, but everybody does that already, so the marketer isn't accomplishing anything special. But when the marketer takes a new item that is performing well, and features that item across channels, causing that item to become a winning item, well, then the marketer has accomplished something. This is a "slow build" approach ... mirroring the slow build in TV ratings for the US Womens National Team. We just need patience. We also need the right reward structure.