I did something I seldom do ... I paid my own airfare, parking, hotel, and conference fee, and attended NEMOA last week. I traded four months of grocery bills for an opportunity to learn about "The Omnichannel Circus".

What did I learn?

Brookstone - their CEO supported a year-long mail/holdout catalog test. How many of you have the courage to do that? He proved that his catalogs, when measured conservatively across channels, delivered between $2 a book and $3 a book - not good performance by any means, but good enough to generate profit, and that's all that matters, right? It was interesting to hear the whispers in the audience ... "see, catalogs work" ... but nobody was paying attention to the fact that $/book was about half of what it might have been ten years ago. Also - no mention of the financial challenges plaguing the company.

Margot Murphy Moore - A sheer delight to hear her mention that best practices like renting names for prospecting and measuring catalog performance via keycodes failed at her organization. You could hear audible gasps in the room ("she can't be right"). Her session should have been given a full hour - catalogers need to hear that you can have success without following long-standing best practices. Think, catalogers ... how did she acquire new customers without participating in the renting/exchanging of lists?

Steve Spangler - the audience enjoyed the balloons (above), but they should have heard the message that a catalog-centric science brand used other forms of media (Ellen, TV, YouTube) to grow his business. I think this concept may have gone right over the heads of the attendees. I am surmising that NEMOA hoped the audience might at least think about the concept of marketing through other channels.

Google - I heard audible groans when the folks at Google, a full half-generation to generation younger than the core audience at NEMOA, suggested that digital marketing was effective. Here, the generational gap might be too big to bridge - Judy is not a big "retargeting / remarketing" fan - Jasmine, however, responds differently.

Attendees - Way too skewed toward vendors/suppliers. I don't have official numbers, but the mix felt 2-to-1 in favor of vendor/supplier attendees. One supplier told me that their business would cut back to one day of attendance next year, because there were not enough "prospects" in attendance to sell to. Let that one sink in for a moment.

Vendors/Supplier/Sponsors - This is a list of folks who keep NEMOA afloat. Not surprisingly, these folks tend to work together - they really don't compete against each other as much as they are frenemies. 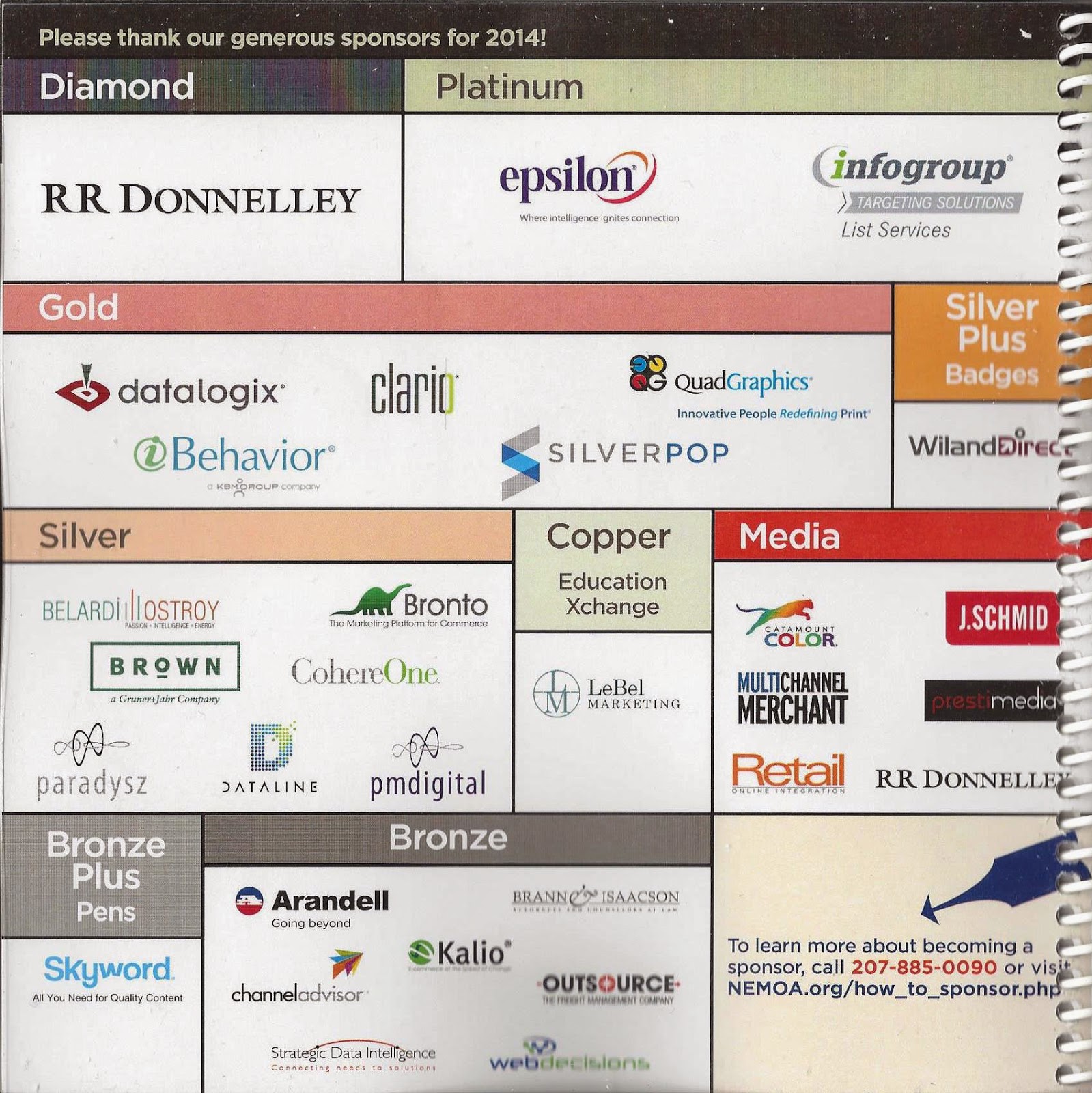 In the past, NEMOA gave speaking slots to top sponsors in exchange for sponsor generosity - I don't know if that is the case today or not. That being said, "pay-to-play" is common in the conference world - I was asked to volunteer my time to speak to the Digital Analytics Association last year, then was kicked out because, as the conference organizer told me, "the sponsors demand speaking slots, so we must rescind our agreement so that we can take care of our sponsors and make sure that our sponsors receive a sufficient return on investment". What about conference attendees?

Catalogers, generally in the minority in the audience, have to be careful, balancing what they're being taught and balancing the rhetoric of not-so-kind sponsors with what reality might suggest. I know, at NEMOA, sponsors are not allowed to sell, so that's a good thing. But sponsors do other things. One sponsor asked me (at NEMOA, quite publicly) to stop writing my blog and join their organization so that the industry could provide a "unified voice" to the audience. Let that one sink in for a moment. One of the speakers recently told me in a phone conversation that the speaker was going to "put me out of business". Do I deserve this? Maybe. I try my hardest to speak the truth. I tell you what the data is telling me. Often, what the data is telling me is that the co-ops are funneling you old customers, rapidly accelerating the age of the customer in your database. Would sponsors want me to be quiet, or to be put out of business, so that they can stay in business in the short-term while they find their own path to the future? Maybe.

Most people who work for NEMOA sponsors, however, are wonderful people, and were more than helpful to my clients at NEMOA. Keep that in mind.

What could conferences do to balance sponsor interests with content that can help a cataloger? Here's a couple of thoughts, assuming "pay-to-play" is a necessity.

Now, the kind folks at NEMOA are in a no-win situation. No matter what they do (suppliers, catalogers, entertainment), somebody is going to say that the content did not meet their expectations. I'm just reflecting what I'd like to see, based on feedback I obtained at the conference. Things are simply too supplier-centric. Go read the tweets from the conference, you'll see the tweets are dominated by suppliers. The danger, if you are a cataloger, is that if the social aspects of the conference dry up just a bit, then it is not worth it for catalogers to attend. A full third of the folks in New England that I reached out to, folks who frequently attend conferences in New England, told me they chose to not attend NEMOA this year. These are people I spoke with, at NEMOA, in 2012.

We need to think about these topics, folks.

Ok, time for your thoughts. What did you learn? What would you like to learn? Did you have fun? Would you go back? Do you think I'm nuts, or are the ideas presented here of interest to you? Email me (kevinh@minethatdata.com) or leave a comment.
- March 17, 2014