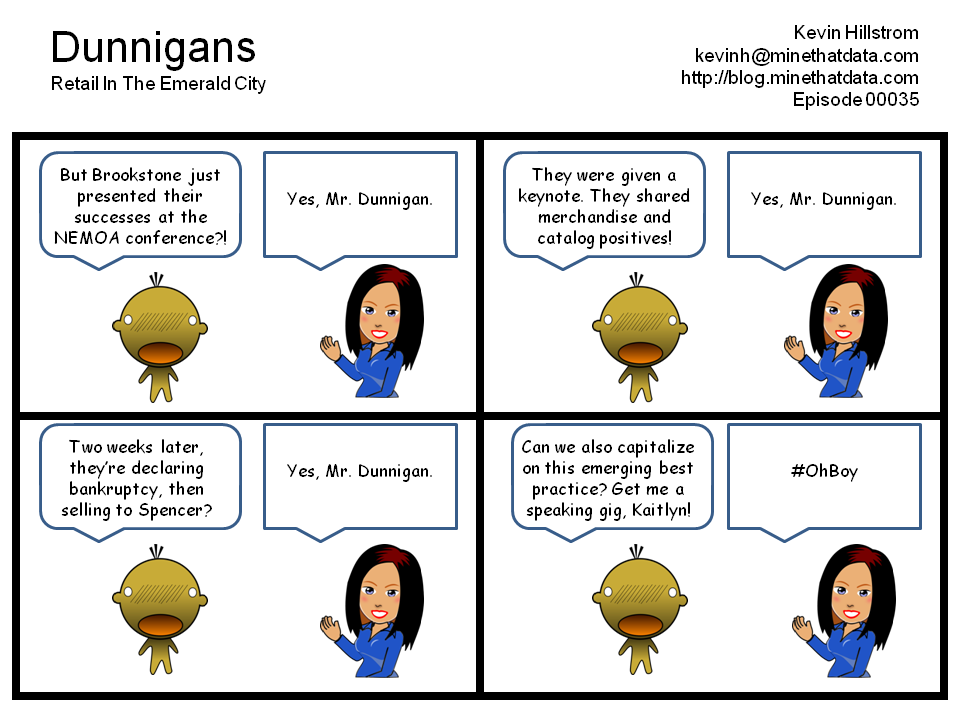 A couple of things.

Give this ditty from ROI (Retail Online Integration) a read (click here) ... it details the keynote that Brookstone gave at the recent NEMOA Spring Conference. There's a quote in the article from Brookstone's CEO that I find interesting

There are a lot of companies that are not declaring bankruptcy - at many of those companies, the goal of every marketing effort is to create awareness that generates profit.

I attended the Brookstone session at NEMOA. The session started with the CEO projected on a robotic LCD monitor that waltzed down an aisle toward the speaker podium, just like the Big Bang Theory episode that featured a virtual Sheldon Cooper. It was a neat stunt, and it featured an innovative product. But Microsoft has innovative products, too - their tablet devices are arguably better than any other tablet out there. Innovative products do not guarantee profit.

It's easy to blame the economy and crippling debt. It's hard to align innovation with customer needs. That's the job of a brilliant merchandiser. It's time for all of us to prioritize brilliant merchandising over attribution models, omnichannel, social media, and catalogs. It's time to stop cheerleading "hyper relevancy" when what we need, quite honestly, is "hyper profitability".

Is this about Brookstone? No. This is about you. I'm using Brookstone as a metaphor for where we are all headed if we don't focus on what is important. Our industry has been teased ... teased into believing that we can use magic to generate business, that merchandise is not important. Merchandise means everything.
- March 27, 2014