30% Off Plus Free Shipping! 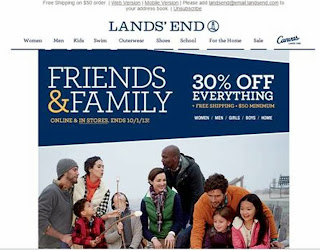 When you see a whopper like this, there are three things I want you, the intrepid business leader, to do.

First, you're going to do your best to perform some sort of holdout test. Since you have retail stores, maybe you do a geographic holdout test - nobody in Arkansas gets to participate at this level of discounting. I'll get to why the holdout test is important in a moment.

Second, you're going to simulate what it takes to generate profit, before running the promotion. If you have 65% margins and you can expect your holdout group to provide shipping/handling revenue 40% of the time (at $12 per order), your profit and loss statement might look something like this (your mileage will vary).

You need a 115% increase in demand during the promotion, in order to cause the promotion to generate profit. Here, I am assuming no incremental ad cost whatsoever, that's why profit looks so dandy in a normal business situation.

Look at the "Increment" column - this is the true value of the promotion (more on that in a moment). Under normal business circumstances, we're actually making money on shipping and handling, so we generate 71% profit (you can do that when your gross margins are 65%). We generate about $71,000 profit on $100,000 of sales. The promotion generates $1,670 profit on $115,000 of sales, a bit greater than a 1% profit level.

Here's the third (and most important) part of the analysis. When the promotion ends - KEEP MEASURING THE DIFFERENCE BETWEEN TEST AND HOLDOUT - preferably for a month (or longer).


The promotional group generates $615,000 in the five weeks, total. Now, let's see what happens to the holdout group, the group in Arkansas not offered the promotion:
This happens all the time. Promotions pull sales "in early". The customer would have spent money in week three, but the promotion pulls the sales (and 30% off and free shipping) into week one.

THIS IS SO IMPORTANT!

I'll bet fewer than 15% of marketing analysts measure results this way. When you do this, your profit and loss statement changes, dramatically. 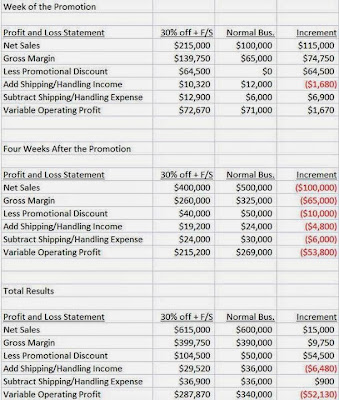 The profit and loss statement illustrates reality, doesn't it? In reality, the promotion causes the business to bleed profit. Sales are barely impacted, we give away precious gross margin dollars to bump up a promotional period, and then we wonder why business is flat in the following weeks?

And guess what happens when business is flat or down over the next four weeks? Somebody will want to add a promotion!!

So please, please, run this three-step analytical process. This isn't rocket science. Just do it! Whether you are the CEO, the CFO, or a smart marketing analyst, just do the math. Then, when you have the facts, you're free to decide whatever you want. But please do the math. Heck, the math might work out in your favor - it might be appropriate to discount and promote your business like this. But how else would you know it to be true?

And finally - yes, I get it, there's a viral component to these type of promotions - that's why you have to perform your test on a geographic basis, so that you minimize spillover of viral effects. All those allegedly "new" customers who would not have purchased need to be part of the profit and loss statement. Again, that's why this is done on a geographic basis, not on a mail/holdout basis.
- September 25, 2013