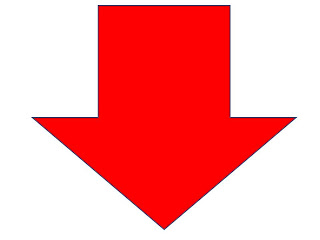 At Eddie Bauer in 1998, the popular theme was "clearance".

I was the newly appointed Director of Catalog Circulation ... in 1998, before the internet took over, that was one of the five most important jobs in any catalog division.  I determined the catalog budget for the year (a budget of more than a hundred million dollars a year - and yes, there were plenty of cooks in the kitchen who would override my decisions, but you get the drift).  My team determined who would receive catalogs, who would receive discounts and promotions.  I got to decide (yes, again, many cooks in the kitchen) if we added or dropped catalogs from the annual contact strategy.  My team forecasted the sales of every catalog, every customer segment, every promotion, every merchandise category in each catalog.

Remember, I had no prior experience in this area.

Well, that's not true.  I worked on countless circulation projects at Lands' End, and was responsible for the models that determined who received catalogs.  But honestly, that was all support work ... no real accountability to speak of.

So when the Inventory Executive stopped by my office on Day 2 and said "I need you to add a clearance catalog to the contact strategy, and I need you to mail enough customers and pages to clear about $10,000,000 of excess inventory, and I need you to not screw up the buying rhythm of our full price customer base", I got that cold, clammy feeling that can only be experienced when enjoying the reality of true accountability.

I started where any analytics expert would start.  "Do we have any cannibalization tests, A/B tests designed to measure what happens when we add a clearance catalog?"  Heck, we had dozens of these tests at Lands' End.

"No, we don't execute tests like that at Eddie Bauer, we don't want to lose demand."

So we had to add a clearance catalog in Spring, sandwiched between two existing catalogs. My job is to make this work for all parties involved.

I had to craft a scenario that looked something like this: 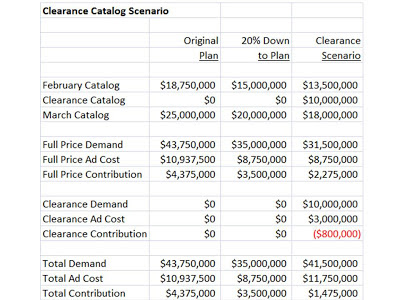 You run the profit and loss statement ... and then you get a sick feeling in your stomach.

See, you had no choice ... you had to clear the merchandise that wasn't going to sell, merchandise that was overbought.  You can't just let it sit there ... well, I suppose you could burn it, but then you're losing an incremental $5,000,000 instead of the $2,100,000 profit hit the clearance book would cause.

Here's a little hint, folks.  CFOs do not like situations where you add $3,000,000 in ad cost and you lower profitability by $2,100,000.  They really, really, really don't like those situations.  No amount of pithy advice from the experts on Twitter ("a social brand is a successful brand" ... "don't own your own product, avoid proprietary products") can help deal with having to clear $10,000,000 of merchandise in the next 1-2 months.

But that's the reality of a business in free fall.

And after having the Executive team yell at you about how rotten business is and how rotten your clearance plan is, you get busy trying to fix 1999 while burying the carcass of a 1998 that had just started.

That's my advice to you, dear e-commerce mavens operating in a modern world.  You have to do two things at once.  You have to deal with the reality of your current year, and at the same time, you have to make sure that next year is going to exceed expectations.  Online, the same things happen that happened in the old-school catalog world ... when you ramp up your clearance section, your full price section takes a hit.  Plan this accurately, get through the pain of clearing out the junk, and move on to planning the next year.
- July 28, 2013 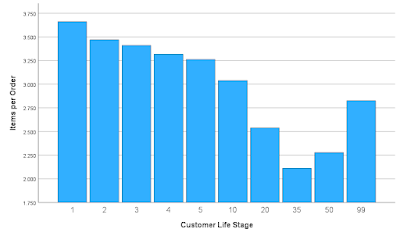