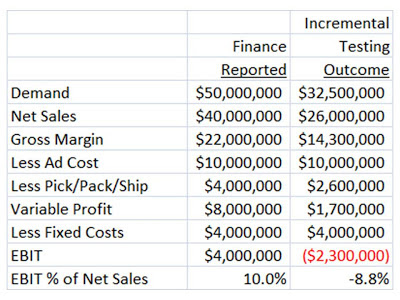 Recall the big 2^7 factorial test we designed at Lands' End in 1993?  Well, after twelve months, the test yielded fascinating results.  More important, however, would be the process to learn how to communicate the results.

You may have noticed ... sometimes, I can have a sharp tongue.  My boss noticed this, way back in 1994, and decided to enroll me in Dale Carnegie training.  Folks, this is about the best class you can take.  I learned how to sell ... not vacuum cleaners, but how to sell data.

Armed with this new knowledge, the knowledge of how to sell, I put together a presentation with the findings of the test.  I knew that a team of Executives were meeting on October 21, so I scheduled a meeting to discuss the findings with my department heads on October 20 (coincidence ... I think not ... that was part of Dale Carnegie training).

On the surface, that sounds like a good thing ... 50% to 76% of the sales were actually caused by catalogs.

But then you ask your finance friends to run a profit and loss statement for you.

The outcome was very similar to the profit and loss statement at the start of this post.  When 65% of the sales are incremental, it means that you're not running a 10% pre-tax profit business ... you're actually running an UNPROFITABLE business!!

Well, the presentation went well - my department head decided that the Executive Team should see the results of the test - and they were, coincidentally, meeting the very next day!

Here's a little hint for you testing advocates out there who think the secret to success in life is in testing everything under the sun and then sharing the results with Execs who will quickly and nimbly change course based on the genius of your findings ... GMs who earn $125,000 annual bonuses for generating 10% pre-tax profit do not like Managers (I was promoted from Analyst to Manager in 1994) who demonstrate that they are actually costing the company a fortune ... regardless how well you communicate results.

Repeat:  GMs who earn $125,000 annual bonuses for generating 10% pre-tax profit do not like Managers who demonstrate that they are actually costing the company a fortune ... regardless how well you communicate results.

Now, I have no idea what happened behind the scenes in the five weeks after this meeting was held.

But within five weeks, the CEO, an advocate of the findings of the test, was fired.  He was replaced by the GM of one of the business units that was, after measuring incremental sales, actually unprofitable.  Within nine weeks, I would be re-org'd out of my new Manager job, I'd lose my staff, and I'd have half of my responsibilities taken away.  I'd also report to a new Director, a person who had no marketing experience whatsoever (yes, companies promote people with no experience ... wait until I get to my summary of the year that was 1998).

What did I learn?

Never - ever - ever - take a passionate, partisan side.  Business is not Fox News or MSNBC, though too often, we treat it that way. See, I moved all-in on the side of incremental sales, alienating half of the company in the process.  I should have moved all-in on explaining customer behavior.

I sided with ideology.

Don't side with ideology.

Side with customer behavior.

Make sure that what you learn about the customer is separate from what you believe your company should do.
- July 22, 2013