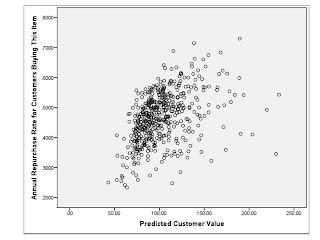 Here's one approach to running a Loyalty Spoiler analysis.


Step 2:  Identify all customers who purchased merchandise in the 4th quarter of 2011.


Step 5:  Create a spreadsheet, one row per customer/item combination, containing the following fields. 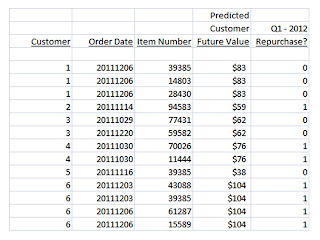 Step 9:  Create an index (this step is important):
This index is a percentage.  It tells us how much an item spoils future customer loyalty.

For example, an item that has customers with an average predicted future value of $100 should yield an average repurchase rate of, say, 20%.

In the next post in this series, we'll address a practical outcome of the methodology.
- April 19, 2012