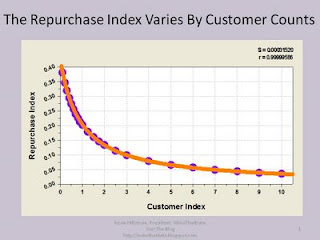 One of the issues many of you have with Multichannel Forensics happens with "start-up micro-channels".

Here's the deal. Let's say you have a Twitter presence. And you do a really nice job of 140 character merchandising, whatever that is.

Maybe 500 customers purchase from Twitter in the course of a year. And of the 500 customers, 250 will purchase again next year ... 200 via e-commerce, 75 via Twitter (the overlap of 25 customers is the hallowed "Multichannel Customer").

This leads us to the Migration Probability Table.

Tomorrow, we'll explore a discovery that should benefit those who are advocates of emerging channels.
- April 15, 2009

How hard is it for you to replicate what Spotify does with Spotify Wrapped? I mean, you have loyal customers. Why not regale them with every...