Several years ago, my wife and I sold a home we had purchased forty-five months earlier. At closing, we were surprised to learn that we had to pay a $5,000 pre-payment penalty, because the loan had been paid off before four years elapsed.

We paid the penalty. We did ask Bank of America to forgive the penalty, given that we had just taken out a mortgage that would generate far more interest in a short period of time than the penalty we were assessed. Naturally, Bank of America declined our appeal.

Two short years later, we refinanced with Wells Fargo. To-date, Bank of America lost $100,000 of interest income, but gained the $5,000 pre-payment penalty. Try calculating the lifetime value of that decision!

Bank of America makes their 10-K statements available on their website, www.bankofamerica.com. These financial documents tell a fascinating tale of the money-making machine that is Bank of America.

Bank of America also earns $25.4 billion dollars of non-interest income, including $7.7 billion dollars in service charges, things like ATM fees or annual fees on your credit card. Another $5.8 billion is earned on credit card income.

It is amazing that we Americans don't raise more of a stink about how much money we give to banks, like Bank of America. We grumble over paying $3.50 for a gallon of gas, and feel frustrated when our annual gasoline bill is $3,000. We feel like the oil industry is gouging us.

Yet, homeowners deal with a situation that is much more severe on their checkbook. A family with a $200,000 mortgage at a 6% interest rate pays as much as $8,700 a year in interest expense. If this family earns $50,000 per year, as much as a quarter of take-home pay goes to the bank servicing the mortgage. Add to that home equity loan interest, credit card interest, car loan interest, service charges and annual fees, ATM charges, and any other expense, and it becomes obvious that your local bank has control over your checkbook.

If you do a credible job of Developing Customers, you'll see your success via what I call a "Time Lapse Analysis". Here is the... 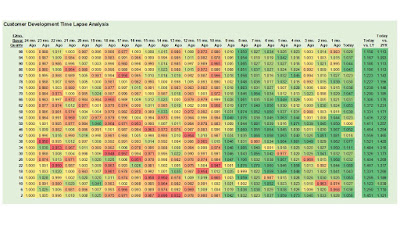