It's highly likely that you are watching pickleball tournaments, live, on weekends via streaming.
And while pickleball commercials are deliberately cheesy, they are decidedly omnichannel in nature (not omnichannel via channels, but showing the allegedly humorous inner workings of a company), featuring employees from Jigsaw Health and professional pickleball players.
Warehouse Antics (click here).
Big Lebowski parody (click here).
Product Meetings (click here).
Office Issues (click here).
There are a bunch of 'em (click here) and you'll see 'em all every weekend while watching tournaments.
Why I am sharing this with you?
First of all, everybody in the pickleball world knows the players who are featured - and they have their favorite characters (players). Second, it's the wild west of pickleball and all of the companies outside of Jigsaw Health are growing business on #merchandise that sells to those playing this growing sport.
And third?
I realize you aren't going to do this, but instead of offering a tepid 40% off to get people to buy, you could feature your own employees and your own company and your own omnichannel operational capabilities all at the same time. Yeah, it's gonna require a bit of originality and it isn't like spending $100,000 on Facebook ads.
Marketing is not spending money on channels ... that's an operational role that is easy to do and sounds strategic, but in reality it is a replacement for a lack of creativity.
Marketing is a fusion of strategy and creativity. If you spend money exposing prospects to your creativity, you're operating on a different level. And through your creativity, you can excel at Customer Development!
P.S.:  This is where some of you send me emails telling my why this is a stupid idea, or telling me that you can't do anything creative because you sell widgets and the way you sell widgets is by offering 40% off on Facebook. You might be right. But at least take five minutes and think about what it means if you are wrong, ok? You are smart!!
- August 15, 2021 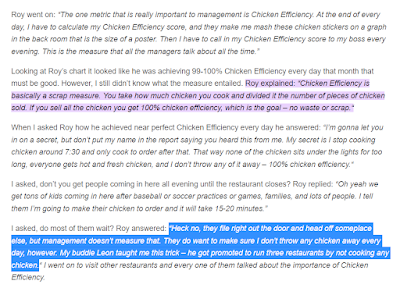