But I Cannot Afford THAT Many Customers

This is the part of the discussion where the Virtual Chief Performance Officer hears the grumbles, from near and far.

You can't afford NOT to test THAT many customers.
When I worked at Nordstrom, the Online CEO and I had to negotiate the size of the "testing budget". I needed a lot of customers, he needed a lot of sales, and he needed to learn things. So compromises had to be met.
I'd pull out a graph that looked something like this (don't worry about the y-axis at this time ... worry about where it is high vs. where it is low). 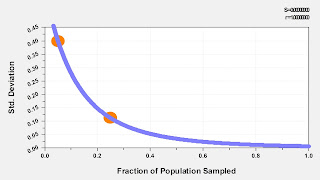