In my project work, especially in the past few years, email marketing has become a much more meaningful component of client requests. They want to know if what they are doing yields a reasonable outcome.
Invariably, I'll share something and the client responds with a "we're doing this because it is a best practice" comment that just makes me cringe. Doing something because everybody else does something does not make doing something right.
Allow me to share something from the world of pickleball. There is a mother/daughter team that won the National Championship in November. The daughter, age 12 at the time of the tournament, plays different than the rest of the professionals play. Take a look at the image below. 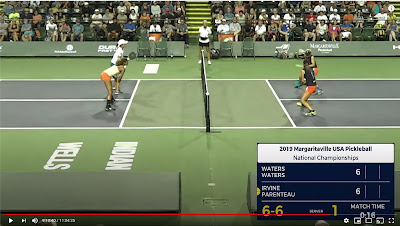 The twelve-year-old is receiving the ball on the right side of the screen. Look at where all four players are standing. On the left side, both players are up close to the line ... called "the kitchen" in pickleball or the "no volley zone". Now look at where the mother is standing ... very close to the line. Finally, look at where the twelve-year-old is standing ... she's a full step back from the line.
The "best practice" in pickleball is to stand right up against the line.
The twelve-year-old violates the best practice. Frequently her mother also violates the best practice ... when the action gets intense, both the mom and daughter step back one step.
Turns out this tactic gives the two of them more time to attack ... just a fifteenth or twentieth of a second, but that's more than enough time to give them a quick advantage.
During this video, the announcer, who is a professional player, tells the audience that this is not the way that anybody plays, "but it works for them".
Well, come on ... maybe it could work for lots of players, or for everybody!
Best Practices are Boring. If everybody does something the same way, might it be time for you to do things differently?? Best Practices change ... what was right at one time becomes outdated. Try something different. And what if it works? Try something different!
- May 14, 2020