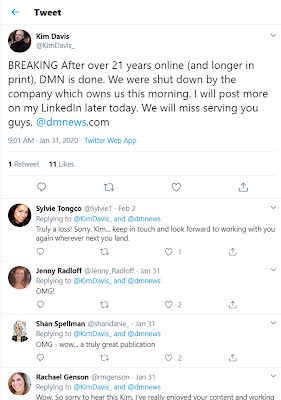 I'm at Lands' End, way back in 1992, and we were in the process of bringing in a new set of Marketing Managers. My boss was named one of the new Managers ... and our PR team made sure that a blurb was put in DMNews. There it was ... the new copy of DMNews was delivered via the mail, you opened up to page 8 and the announcement was there for the entire industry to read about. You'd hear the phones ringing across the office (#landlines), people actually read the content and called our Managers to congratulate them.

In 1992, DMNews was a print publication that you couldn't wait to receive, simply because there was so little news publicly available.

DMNews had a front-row seat for the dramatic evolution and ultimate contraction of the catalog industry, reporting pundit thoughts ... frequently off-base pundit thoughts (search their site for thoughts about Amazon from 2001-2002), but interesting stuff nonetheless.

The very forces that DMNews reported on were the forces that tore apart their own industry.

And with the death of what ultimately transitioned into DMN, we've witnessed the full evolution and contraction of the catalog industry ... an industry that peaked with the J. Peterman character on Seinfeld twenty-five years ago ... an industry that has witnessed the withering of key conferences and key publications and key brands and the utter collapse of the catalog co-op ecosystem. All of which, of course, have been replaced by entities that are much stronger and newer, covering e-commerce and mobile and the current implosion of retail.

Those entities will, one day, be replaced as well. That's how this works.

90% of my readers will see this and start snoring ... this will have no meaning, because what was relevant in 1992 has no direct application to what matters in 2020. And that's ok. But think carefully about where you get your information today ... maybe you love attending Shoptalk for free ... there will be a day when that entity is gone as well. That's how this stuff works.

Enjoy and appreciate what you have today.

Work hard to create something that will be viable tomorrow.
- February 06, 2020