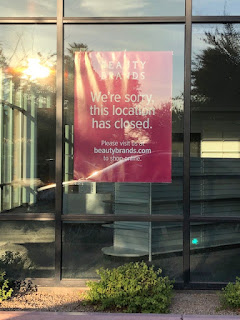 Today is essay day. If you don't want to read something long, stop here.

I spend a lot of time on Twitter criticizing retail ... not actual retail brands necessarily, but the "thought leadership" regarding retail.

Were you in retail in the late 1990s? I was. Business wasn't great as we approached the year 2000. And once we entered a recession, the online world crumbled. Remember the online world pre-2000? It was the wild west.

When the online world crumbled, Retail Executives had an opportunity ... they would "reign-in" those crazy online wombats who were doing whatever the heck they wanted to do. I was in the meeting, I heard every possible flavor of this sentiment.

At Nordstrom, my team measured the impact of email marketing. In the first half-decade of the 2000s we'd send multiple messages to customers, personalized by customer merchandise preference. I'm stunned how few people do this today. It's free money.

Anyway, we'd always get a lot of feedback (even though we weren't responsible for the creative or the messaging).
My team would test store-based messaging. We learned the following:
We had the data. What were we supposed to do? We had to be data-driven, right?

So our messaging evolved to the point where it was mostly online-centric. That style of messaging performed best.

Fast forward to 2019, and the messaging is still digital-centric. Go visit Mailcharts and look for yourself. Nordstrom had a recent campaign that encouraged the customer to buy online and pickup in a store or to shop online right now. Those are the two choices offered. Never mind that 75% of their sales likely happen in a store, the messaging tells the customer to only visit a store to pick up an online order or to sit at home and click.

A typical retail brand sends 150-350 email campaigns per year ... and the majority of those messages are digitally-focused. For twenty years, we've trained customers to ignore stores. And guess what? Customers listened to us!!

In the 2005-2010 timeframe retail purchased began to be cannibalized by a fully functional online channel. You have to remember that most retail brands didn't have a viable catalog channel, so they had to build e-commerce from scratch. Once retail brand e-commerce performed at a credible level, customers began to shift, aided by 150-350 email campaigns per year demanding that the customer shift behavior.

Ok, you have a customer who used to be a pure retail shopper, and that customer spent $300 a year. But you had to send the customer 150-350 digital messages per year demanding that the customer shop online instead. And your messaging worked! The customer finally shifted. Now instead of spending $300 a year, the customer spends $330 a year (not the 8x amount of $2,400 a year that vendors, trade journalists, and research brands told us the customer would spend ... their lies amplified the problem, but that's a topic for another day), spending $250 in a store and $80 online.

Did you get what just happened there? The customer went from spending $300 in a store to spending $250 in a store.

Now, this drop in spend is barely noticeable when e-commerce is 4% of annual sales.

But this drop in spend becomes noticeable in two key ways as e-commerce approaches 10% of annual sales.

But second, and far more important, is the fact that most retailers participate in a "shared traffic model". In other words, when Macy's brings a thousand customers into a mall, Ann Taylor benefits because 125 of those customers visit Ann Taylor as well. But when Macy's tells the customer to not visit a Macy's store, the Macy's customer listens ... instead of 1,000 customers entering Macy's maybe just 800 visit Macy's, which means that 100 instead of 125 Macy's customers visit Ann Taylor ... which means that Ann Taylor experiences a sales decline because Macy's executes digital messaging.

Now imagine what happens when every retail brand in a mall executes digital messaging, causing every brand to get less volume in a store, causing less traffic across the board???

Everybody loses. Everybody applying a "shared traffic" model gets less traffic, causing everybody to generate less in-store sales volume.

Do you think anybody decides that this trend could be reversed by simply having a great store experience coupled with a ton of customer re-education? Nah. Not really. Instead, retailers employ the poison pill ... they offer deep discounts to buy in a store. 40% off. 50% off. All this does is cause a quarter or more of the store portfolio to become less profitable, to the point where the CFO gets interested and starts "asking questions" ... questions like "why do we keep an unprofitable store open when we could just take in all the orders online and close the store???"

That, of course, is a lousy question to ask people who don't have a simulation environment that allows the CFO to get an accurate answer to her question. Instead, stores just close.

What happens when a store closes?

Remember that $330 that the customer spends, with $250 in a store and $80 online? Well, 70% of the retail spend disappears. $75 remains ... and if there are stores nearby those stores capture the majority of the volume ... otherwise the online channel "might" capture the sales. Let's assume the online channel captures all $75. Here's the story.
The customer instantly becomes less loyal. This doesn't become apparent until a year or two later when the customer exhibits reduced loyalty and the financials don't work and the CFO starts digging into the problem again, asking uncomfortable questions like "why isn't the customer buying online and what do we do to increase sales once again??" By that time, it's too late, the damage has been done ... digital strategy took a customer who used to spend $300 in a store and turned the customer into one who spends $155 online.

If you don't believe this is the case, go ask anybody working for a retail brand who operates a simulation environment what happens ... I'll sit here and wait, ok?

This is what we've done to retail. We did it. All of us.

The critic in the audience will tell me that my logic fails to resonate because Walmart and Target and Best Buy are doing ok. The critic fails to remember that those brands do not operate in a "shared traffic environment" like mall-based retailers operate in. It's the "shared traffic" component of retail that amplifies the problem. When Ann Taylor tells the customer to shop online the customer doesn't go to the mall and consequently doesn't visit J. Jill, thereby hurting J. Jill.

Out on Twitter all sorts of opinion-based gurus, thought leaders, vendors, research brands, and trade journalists have ideas for fixing retail. The latest piece of nonsense coming from this audience is a term called "phygital". Google the term. Have a bag ready next to you to vomit in should you become nauseated by the thought of merging digital and online experiences to generate a seamless retail panacea. "Phygital" is the rebranding of the term "Omnichannel", which was the rebranding of the term "Multichannel" which, well, you get the picture. It's a failed thesis, and it's a thesis that makes vendors & pundits & thought leaders & research brands & trade journalists a lot of cheddar.

If you adhere to a "phygital" thesis, you might believe that marrying digital and in-store experiences is good for the customer. You might be right ... you might achieve the $300 to $330 a year gain I mentioned earlier. However, you haven't solve the "shared traffic" problem, have you?

That's the problem that has to be solved.

We need ALL retail brands to de-emphasize the digital side of the business and instead prioritize getting the customer to get in a car and drive 12 miles to a store.

The job of a retail marketer becomes not fundamentally different than the job of the Athletic Director at the University of Illinois. Imagine trying to get people to attend an Illinois football game when the team (merchandise) isn't very good and the game is available on television for free (just like your merchandise is available online)???

This is what the future of retail looks like ... we have to figure out how to get people out of their homes, into a vehicle or into mass transportation, and then have to provide a compelling in-store experience ... or we end up like a college football stadium that is half-empty with a losing team getting pummeled 42-7.

"Phygital" doesn't accomplish this, does it?

The first retail marketer who figures out how to redirect traffic from the online channel to stores is going to become famous.