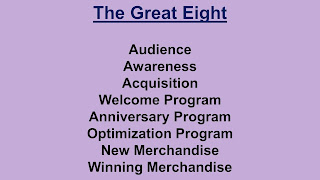 So Amazon created a major shopping event out of nothing, and now they're killing it in July (a month when nobody can sell anything other than ice cream cones and lemonade).

Many of you jump on board with your marketplace activity, trying to leverage their efforts. That's good.

What's better, of course, is that you create your own version of Prime Day ... something unique to your brand. It requires hard work, of course. But the rewards are clearly worth it. I was stunned when I worked at Nordstrom in the stone ages (2001-2007) and we could do Christmas business in July.

You can do this, too! An Anniversary Program is critically important to your success. Heck, have four key Anniversary Programs during the course of the year ... one in July, one in October, one in January, and one in April. You get a free event every year (Thanksgiving - Christmas), so why not create something clever?
- May 21, 2019

It Has To Work Now

You get emails from people. All sorts of interesting feedback. One of the common ones goes like this: "I need a tactic and the tactic h...