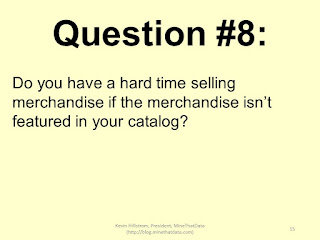 It's 2005. I'm sitting with the Inventory VP, and she's angry. We're about to kill our catalog at Nordstrom, and she has a bone to pick with me.
I pulled out my mail/holdout test reporting. When we did not mail a catalog, customers still bought stuff - at robust levels. Different stuff, of course, but still spending plenty of cheddar.

The Inventory VP then pulled out her reports. She showed me how "internet-only" items only pulled 1/10th the volume of a catalog-featured item. I'll paraphrase her next comment.
We killed the catalog in the middle of 2005.

Most of the catalog items, per the VP's thesis, died on the vine.

The other half of the assortment, now supported by a robust search campaign, sold like hot cakes.

Profit had never been better.

If your view of the world is catalog-centric, you'll have a hard time selling merchandise not featured in a catalog.

If your view of the world is merchandise-centric, you'll find ways to sell merchandise.

How you answer the question above says a lot about the marketing channel that you prioritize at your company.
- March 20, 2018

It is time for yet another run of The MineThatData Elite Program. Yeah! Four months pass quickly these days, don't they? For just $1,800...