Who Are These People And Why Should I Care About Them? 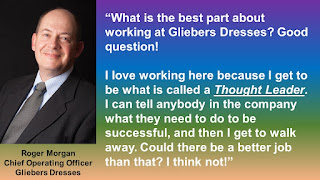 A reader asked "Who are these people, and why do they matter?"

Who are these people?

Glenn Glieber:  The owner of Gliebers Dresses for all but approximately one year (when he sold the company to Private Equity and Roger Morgan ran the company before buying the company back). Glenn's favorite phrase is "I love free marketing", which is a curious phrase given that he consistently spends 30% of net sales on marketing. Mr. Glieber is a good man, but is struggling to reconcile the catalog marketing model of the 1980s with modern marketing channels.

Lois Gladstone: The CFO at Gliebers Dresses, Ms. Gladstone seldom gets to do actual financial work. Instead Ms. Gladstone is constantly trying to reign in marketing spend and Roger's ever-increasing budget for papers from Woodside Research.

Meredith Thompson: The Chief Merchandising Officer at Gliebers Dresses. Ms. Thompson is the "keeper of the culture". Most traditional catalogers have a "keeper of the culture", a person who limits the ability of a company to move forward. She's seen everything in her 40 year tenure at Gliebers Dresses, every gimmick, every trick, every way to try to grow sales by cheating. Consequently, she's highly resistant to new ideas.

Roger Morgan: The Chief Operating Officer at Gliebers Dresses. Mr. Morgan (like so many in e-commerce / retail / cataloging) strongly believes he could perform the marketing job, and strongly believes that marketers are idiots. Conversely, he doesn't have an original thought in his mind. As a result, he relies upon Woodside Research to lead his thoughts. Not surprisingly, the Executive Team can see right through his tactics, and they outright reject anything he says (even if what he says makes logical sense). Roger has been with Gliebers Dresses for ten years. He politically maneuvered his way into the CEO job when Glenn sold the company ... and promptly ran the company into the ground. He also sold Gliebers Dresses merchandise on Amazon in 2017 (and made a tidy profit), but was kicked off of Amazon for constantly "advising" Jeff Bezos on ways that Amazon could adhere to "Best Practices".

Pepper Morgan-Pressley: Pepper is the downtrodden Chief Marketing Officer at Gliebers Dresses. When business is bad, it is her fault. When business is good, Meredith takes credit. Because Pepper is a marketer, everybody on the Executive Team believes they can do her job better than she can do it. She gets little respect. She's been in the job for eight years. Prior to Pepper taking the job, there was a revolving door in the marketing suite, as various business leaders were constantly being fired in an effort to "improve performance". Pepper has not been fired. She figured out how to get things done while letting everybody else take credit. She is the opposite of Roger Morgan in just about every possible way.

Why should you care about these people?

People. It's about us. We don't make progress because of "us".

The stories that are coming are about the people. They will build toward my presentation at VT/NH Marketing Group on April 5 (click here). Get yourself signed up right now for the event on April 5, ok?!!