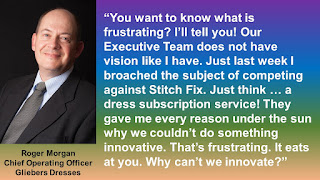 There are many ways to innovate. You can invent a social network. You can create an app that solves a health care problem. Or you could create a billion dollar subscription-based apparel business.

While Meredith doesn't like Duluth Trading Company, she has utter contempt for Stitch Fix.

Always remember that any existing company could have created Stitch Fix, or could currently compete directly against Stitch Fix. So that hurts Meredith ... she doesn't appreciate anybody saying anything kind about a company that she could have created herself. Instead, Meredith oversaw a five-year profit-and-loss statement that looks like this: 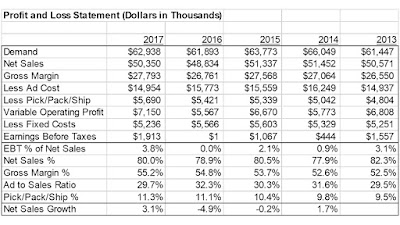 When Roger suggests that the company "innovate", it eats at her soul.

When Pepper shows a five year customer acquisition trend that looks like this ... 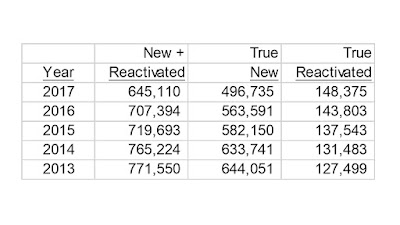 ... the trend eats at her soul. She's not going to tell anybody, but Meredith views the data as an attack on her ability to be a solid business leader. Remember, Meredith was Cataloger of the Year in 1981.

The "data" makes it clear that the company needs to innovate.

The business model of Stitch Fix is foreign to Meredith. Intuitively, she understands it easy enough ... customer fills out a profile, data determines what the customer receives, customer is shipped merchandise the customer didn't ask for, customer buys it anyway. But for "her generation", this concept is utter nonsense. This isn't how she would shop. Her friends wouldn't shop this way either. When her friends get together to play Canasta, they talk about what was in the most recent In The Company of Dogs catalog ... they don't talk about Chewy.com.

So again, Meredith knows why she needs to change/innovate. But change/innovation, as prescribed to her (and it's important to note that it is being prescribed to her, she isn't asking for it), is foreign. You'd have to be Meredith's age to understand. Change is easy when you are 27 and you are being lauded as Cataloger of the Year in 1981. Change is harder when you are 64.

The need to innovate eats at the soul of the person who has to carry out the innovation and has run out of ideas, thereby requiring Roger Morgan to have to innovate on her behalf. This causes people to perceive Roger as being "annoying".

The problem at Gliebers Dresses isn't Innovation. Every idea under the sun has been discussed, beaten to death, pro and con.

The problem at Gliebers Dresses is a lack of empathy for the person responsible for merchandising innovation. And while you might not have a lot of sympathy for somebody earning $250,000 a year plus a stealthy bonus, it's important to somehow make the person who maintains the culture of the company feel like s/he is innovating when in reality, it is you who is doing the innovation.

Maybe that means you have to create multiple brands ... keep Meredith focused on the catalog and congratulate her every time the catalog is on plan ... while giving Haley (the up-and-coming merchandising manager) responsibility for a modern mobile brand ... and if the startup works, Meredith gets credit as being a visionary responsible for shepherding a team responsible for creating a new brand. Maybe you have to play to Meredith's strengths instead of constantly telling her she is a fossil and constantly reminding her that outside vendors have technology to solve all problems.