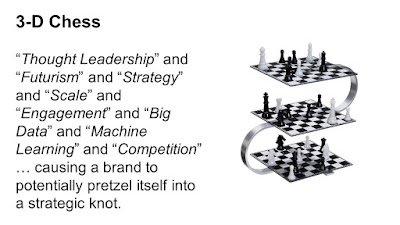 We've all run across this, haven't we?

There are cultures that love to talk, to think, to debate. The only thing they don't want to do is change. Or they can't change because they get caught in an infinite loop of strategic roadblocks.

I was in a meeting that came to an absolute standstill because the CFO wanted to have a meeting-wide debate about Paid Search vs. Organic Results. This wasn't the purpose of the meeting, but it was what the CFO wanted to talk about. Hint - the CFO believed that Paid Search was a waste of money and that the CMO (Chief Marketing Officer) was bleeding the company of cash that could be allocated elsewhere. The talk veered in and out of company tactics, diving into what Google does with the data and how a theoretical customer would behave if the keyword didn't result in the brand being placed in second position - followed by arguments about whether you can trust the bidding process or not.

Twenty minutes later, nothing changed ... but as the CFO said ... "I love talking about strategy!"

That wasn't even strategy we were talking about. Imagine if somebody actually wanted to talk about strategy?

I recently had a conversation with a Professional. He asked why I never talk about strategies for battling with Amazon? When I suggested that any discussion about Amazon represented pointless drivel and was anything but strategic, the Professional bristled. "It's what everybody is talking about!" was the response.

If everybody is talking about something, then it falls into the 3-D Chess Category. It's stuff that is fun to talk about. You tie yourself into pretzels thinking about the complexity. There's no right or wrong answer, just opinions that allow people to argue ... and those arguments lead to vendor consensus that is ultimately monetized via solutions they sell us ... and since we all "agree" to a large extent, the solutions are sold.

Others play 3-D chess. Complicated. External issues. Weather. Competition. Strategies that require 30,000 employees to agree. Lots of research. Surveys. Focus groups. Data overlays. These folks get 15% of the way into the 3-D chess game, make no progress, and then pick a new 3-D chess game.

Work with people who get things done via uncomplicated plans that do not depend upon "the competition".
- December 19, 2017