A Session With Catalog Craig Paperman In A Hotel Lobby 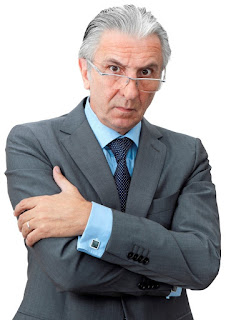 Setting: The lobby of a hotel where an omnichannel conference is being held. Catalog Craig Paperman sits with me.

Kevin: Craig, you look frustrated ... like you punctured the flesh covering your hip while sitting on a thumb tack.

"Catalog" Craig Paperman: What is wrong with you?

Craig: I sat through your talk today. It was an utter abomination.

Craig: You know Kevin, I don't agree with everything you say, but sometimes you make interesting points.

Craig: And you peppered the audience today with a slurry of objectionable and provocative statements.

Craig: You said that omnichannel was dead. Are you obtuse? Ask any vendor, omnichannel is real, and it is spectacular.

Kevin: I didn't say it was dead. I said omnichannel was fraudulent.

Craig: That's worse! You just need to shut up and go away.

Kevin: Can we agree that Macy's is the poster child for omnichannel strategy?

Craig: Maybe. They sure don't match the raw power of a catalog and a website, to be fair.

Craig: Send an email on Monday and a catalog on Tuesday and you'll have an order on Wednesday.

Kevin: If that is true, then why was Footsmart purchased for a modest sum and then the catalog was shut down? If your combo was powerful, wouldn't companies be paying a premium for catalogers and then expanding catalog programs?

Craig: I cannot speak for the idiocy of those who buy catalog brands.

Kevin: And there's going to be 8,000 store closures this year. If the omnichannel bricks 'n clicks model worked, we'd be adding 8,000 stores a year because sales would be so plentiful that we'd all be compelled to open more stores.

Craig: You are cherry-picking your outcomes.

Kevin: 8,000 store closures in 2017 is not cherry-picking. It's pretty much the implosion of an entire business model.

Kevin: You are blaming Amazon? You said that omnichannel strategy would defeat single-channel brands. And yet, Amazon is in the process of destroying traditional retail. If anything, you need to take accountability for misleading so many professional members of the catalog and retail community.

Craig: Wow is right. You told the audience that omnichannel strategy does not increase customer spend.

Kevin: Because the facts are fraudulent - if customers spent 8x more, then wouldn't every company following an omnichannel thesis be growing at healthy rates?

Craig: You don't argue with facts. In fact, you shared fake news with the audience today.

Craig: Seriously. You can't just make up your own facts, that's what some in the vendor community do for us. They lead our thoughts. They're "thought leaders".

Kevin: In the past decade, I have written one million lines of code to analyze hundreds of billions of purchase transactions. I have facts on my side. Lots of facts. Have you written the code and put in the hard work to understand how customers behave?

Craig: That doesn't make me wrong. I have the "right" facts on my side.

Kevin: Describe a fact that is "right".

Craig: I'm not going to go down that road.

Craig: Because you'll just find a fact that refutes what I said. You don't have faith.

Craig: There you go again.

Kevin: Who makes money in the catalog industry when we mail more catalogs?

Craig: Because my CEO is a lumber-headed moron who prioritizes profit over engagement. And that brings up another point. You said you did a poll on Twitter and 52% of your readers would prefer to have an engaged customer over a customer who spends a hundred dollars right now. Then you lambasted those who took the poll, telling them they need to prioritize sales and profit over engagement. I mean, are you stupid? The majority of people are on my side, the "right" side of the equation. Your poll proved I am right.

Kevin: You prefer engagement over profit?

Craig: Because an engaged customer is a profitable customer.

Kevin: Who told you that?

Craig: And there is no better way to engage a customer than with a catalog.

Kevin: So we should all spend $0.75 per mailing to engage a customer and we should be ok with the fact that the customer doesn't buy something?

Kevin: How do you make money if the customer doesn't buy something?

Craig: It's not about making money.

Kevin: Who told you that?

Craig: An industry thought leader. Or somebody at a co-op. I don't know.

Kevin: Your co-op rep told you to mail catalogs and not worry about making money because you'll engage the customer?

Kevin: If you follow that advice, who makes money?

Kevin: Think about this. Your industry partners are telling you to not worry about selling stuff. They tell you to use print to engage your customer, and then you are required to pay them to engage your customer and not make any money. But they're making money. That's what I mean when I say that the omnichannel agenda is fraudulent.

Kevin: It is. Why don't you tell your vendor partners that you'll pay them with engagement points instead of dollars?

Craig: That's stupid. They are providing me with a service, they deserve to be compensated.

Kevin: But they tell you that you do not deserve to be compensated!

Craig: Because engagement will pay off in the long run.

Kevin: Don't pay your co-op and tell them that the engagement will pay off for them in the long run.

Kevin: I think the reason you don't like me is because I am pointing out that I understand how business works, and you're on the wrong end of the business relationship.

On Twitter, I mentioned that Chipotle has come back from the dead and is hummin' these days. The brand grew by more than 45% in the past...