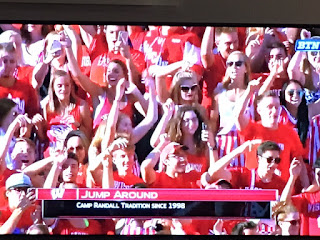 Back in 1998, at the end of the third quarter of a game where Drew Brees would eventually throw 83 passes as a Sophomore at Purdue ... losing 31-24 to Wisconsin ... a tradition was born.

The raucous crowd ... Wisconsin head coach Barry Alvarez later said that "you couldn't hear yourself think" ... was treated to a song on the PA system at the end of the third quarter ... House of Pain's "Jump Around". The student section obliged.

The rest is history.

Watch any Badgers home game on TV, and you'll get to see 80,000 fans jump up and down to the song. If the score is 43-3, you'll see a third of the crowd leave after the song is over ... they're staying for the song.

"Jump Around" is now a tradition.

What traditions do you rally your customer base around?

Oh, I know, I know, I can hear it already. "We sell widgets, there are no traditions surrounding the sale of widgets. It's all about price and promotion, and you'd know that if you paid attention to the widget industry."

What do you think "Cyber Monday" is, after all?

Cyber Monday is a silly tradition created by a trade organization. Nothing more, nothing less. But the trade organization did a great job of telling a story - of telling the story to the press (and to you) - of getting the press (and you) to believe in customer behavior that actually happened for two decades prior (at least) - all resulting in the need for your brand to give away profit on the Monday after Thanksgiving just so folks can sell advertising space in anticipation of a lot of page views and clicks. You give up profit, they make profit. Nice tradition, huh?

So don't for one minute tell me that you don't have any traditions.

If you're willing to participate in Cyber Monday to make a trade organization and the "press" happy, might you be able to create your own tradition and keep all of the profit in the process?