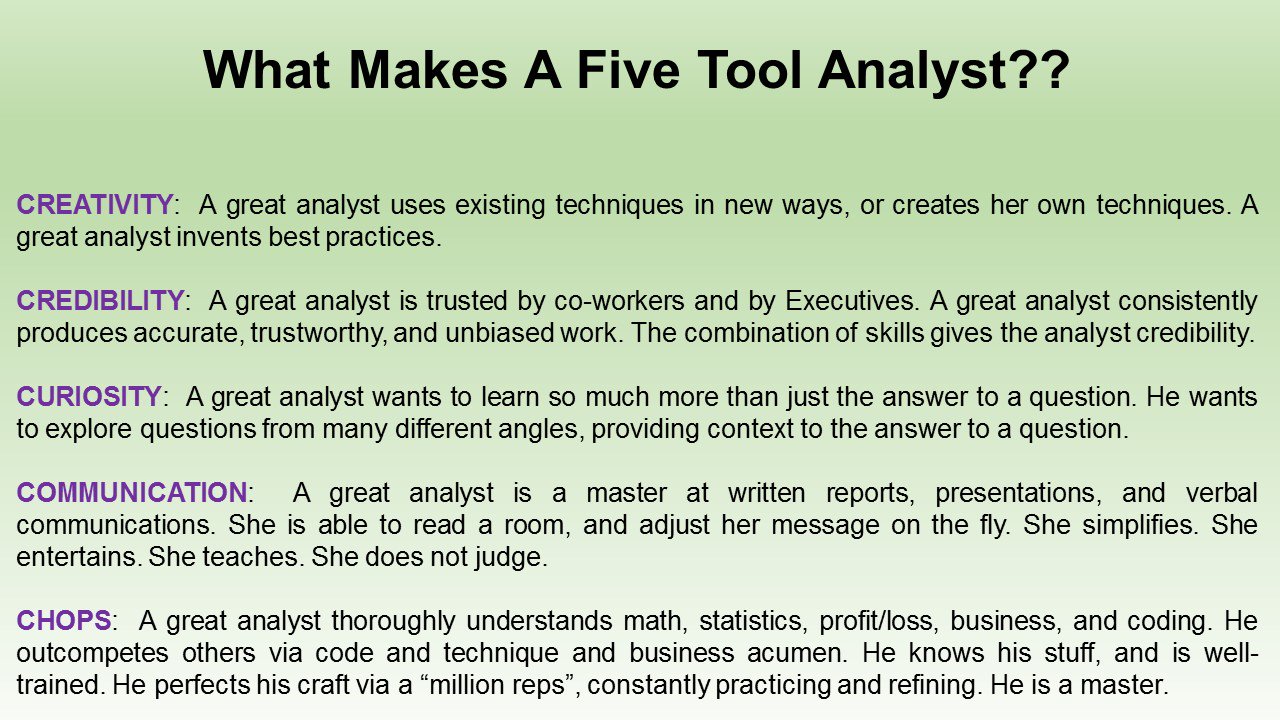 If you are an analyst early in your career, you are probably already listening to my podcast (click here), right?

A few months ago, I talked about what makes what I call a "Five Tool Analyst".

The concept is similar to baseball, where the coveted five-tool prospect becomes a major league All-Star.

The podcast has been interesting, in that I get feedback on two fronts.
Only the Analyst can change this dynamic - by earning the requisite skills necessary to become a Five Tool Analyst.

CREATIVITY:  Here's what I've learned in the past twenty-eight years of analytical work ... creativity is sorely missing. When an Exec asks a question, an analyst provides a dry, non-living query that yields a boring answer that never anticipates the next question the Exec will answer. Consequently, the Exec keeps running the analyst in circles, and both parties end up hating each other. The best analysts come up with new techniques (i.e. stuff you cannot do in Google Analytics) that surprise and delight Execs.

CREDIBILITY: In my consulting work, I'm frequently hired because an analyst failed in some way. If in-house analysts pleased Execs, nobody would hire me. And if I pleased everybody, I would have earned enough money to retire already. Since truth is somewhere in-between, it is really important to earn credibility. You won't please everybody all the time, but if your answers are unbiased and always accurate and tend to anticipate the next question, you will undoubtedly earn credibility. When people think you are credible, you get invited into situations that you have no right being in. When you are in those situations, many people get to see your work, and your career advances.

CURIOSITY:  The best analysts perform work nobody asked for, because they identify problems before Execs see the problems coming. This gets the analyst in trouble ... I was nearly fired once because I spent too much time focusing on an issue that the CEO believed to not be an issue at all, and then felt that I was 100% wrong and he was 100% right. Regardless, you will identify issues and you will play a key role in pushing your company in the right direction if you have sufficient curiosity.

COMMUNICATION:  The best thing that ever happened in my career was being forced to attend Dale Carnegie sales training. In just eight weeks, sixteen hours, I learned how to sell a message. Nobody teaches analysts how to SELL. It turns out that Execs buy what analysts sell. Work hard on your sales skills.

CHOPS:  I once worked with an analyst who ran a Monte Carlo simulation. The analyst then claimed that he had the answers to a problem because he could simulate different outcomes. The analyst knew a methodology - but the analyst didn't realize that the results were simulated results and were not actual findings. Naturally, the analyst crashed and burned when the findings where shared with analysts who possessed "chops". It is really important to know how to code, preferably in multiple languages. It is really important that the analyst know, at minimum, Generalized Linear Models, Ordinary Least Squares Regression, and Logistic Regression. The combination of coding and models / regression enables the analyst to do just about anything. The combination of Google Analytics and Excel allows the analyst to do what Google / Microsoft wants the analyst to do.