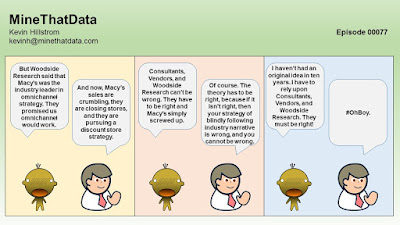 Shares plunge 13% ... comps are negative 3.6% (imagine if you pulled online out of there what comps would look like) ... and the comps come off of a negative quarter prior. Guidance through Christmas is negative comps. Guidance suggests more store closures than previously announced.

From 2011 to 2014, you were repeatedly told that omnichannel was the future ... that you had to align your channels because "the customer" (whoever that is) demanded it.

Macy's brazenly outlined in their 10-K and 10-Q statements that they were "America's Omnichannel Store".

What, my friends, did being "America's Omnichannel Store" get them? Store closures, declining sales, and a future de-emphasis (hint - closing) of underperforming stores while trying to squeeze as much sales as possible out of the best stores. Store closures cause sales to shrink. Negative comps cause sales to shrink. Omnichannel, followed to a logical conclusion, is shrinking sales.

It's not just Macy's, friends. Read anything retail ... as online grows, stores close, and sales shrink. Retailers integrate the shopping experience so well that there isn't a need for at least a third of the stores.

And terror is on the horizon ... largely because online growth is ending. Watch television for an hour, and you will see the digital elite, those who told you two years ago that television was dead and digital meant everything ... well, those folks are now advertising on TELEVISION! They have to generate awareness, because without awareness, there are not enough new customers in the digital future to enable a healthy digital future.

We spent a half-decade deluding ourselves that we had enough customers, we simply didn't have enough channels.

Did you have a chance to view this three minute beauty about Zara? Click here! Watch the darn video. Omnichannel is not mentioned a single time. It's all about merchandise, and you may hate 'em for designing 30,000 styles a year that knock off what you worked six months on, you may hate 'em for going from design to being sold out in under three weeks ... but they focused on merchandise and value proposition in the five years that the rest of the industry lazily integrated channels.