You probably know all about the epic battle between "Waiting For A Girl Like You" by Foreigner, and "Physical" by Olivia Newton-John. For nine weeks, we'd sit by the radio (yes, you did this in the early 80s) ... listening to WIXX as Casey Kasem counted them down, from number forty to number one ... we waited, anxiously, as the songs were counted down ... you'd learn that "I Can't Go For That" by Hall & Oates was climbing the charts quickly.

Seven weeks in a row.

Eight weeks in a row.

Then Hall & Oates leap-frogged past Foreigner, Physical dropped like a rock, and a week later, it was all over, forgotten. Soon, we'd learn that people were the same, wherever you'd go ("Ebony & Ivory").

Why bring this up?

Foreigner was a pretty big deal back in the late 1970s. "Cold as Ice", "Hot Blooded", "Blue Morning, Blue Day", all rockin' tunes for their time. But as you know, it was a "best practice" for rock bands to perform a ballad. Or two. Or seven. You've gotta get the lighters lit at Alpine Valley, attendees swaying due to the soothing tones of a ballad and/or the sixteen cans of Kingsbury beer ingested prior to the start of the concert. By doing the ballad, you appealed to a larger audience. By appealing to a larger audience, you earned $$.

And they all did ballads, didn't they? Styx, Journey, Loverboy, Foreigner, you name it, they all followed the best practice of ballads ... followed it right into a black hole. Ballads changed the perception of a band. You don't think of Phil Collins singing "Illegal Alien" the same way after you've heard him sing "You'll Be In My Heart". After a half-dozen soft favorites, the audience tired of Phil Collins ... he was sappy ... rich ... but known for sappy, empty love songs.

Has this happened to the company you work for?

Did you stand for something once? And then, in a battle to top the charts, you changed? You became something else, you employed best practices, you became omnichannel and created a purchase funnel that looks something like this? 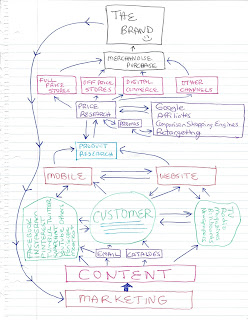 I always go back to my time at Eddie Bauer. The male-centric outdoor brand went the route of the ballad ... selling womens apparel ... until that is what sold the best. I was in countless meetings, with well-intentioned leaders trying to figure out how to "recapture our heritage". Well, you cannot recapture your heritage as a masculine outdoor brand when you sell womens dresses, now can you?

It happened in music, all the time ... sing a ballad, climb the charts, make $$$. But you evolve, and that evolution changes who you are, and pretty soon, without realizing it, you are in a different place.

In other words, from a Merchandise Forensics standpoint, you can chase what wins in the industry (ballads) ... and before you know it, those wins overshadow the winners that made you famous ... and now you're not what you were.

Take a look at what you sold 15 years ago.

Compare that with what you sell now.

Did you go the path of the ballad?

Or is your merchandise assortment still rockin' and rolling?
- July 14, 2015