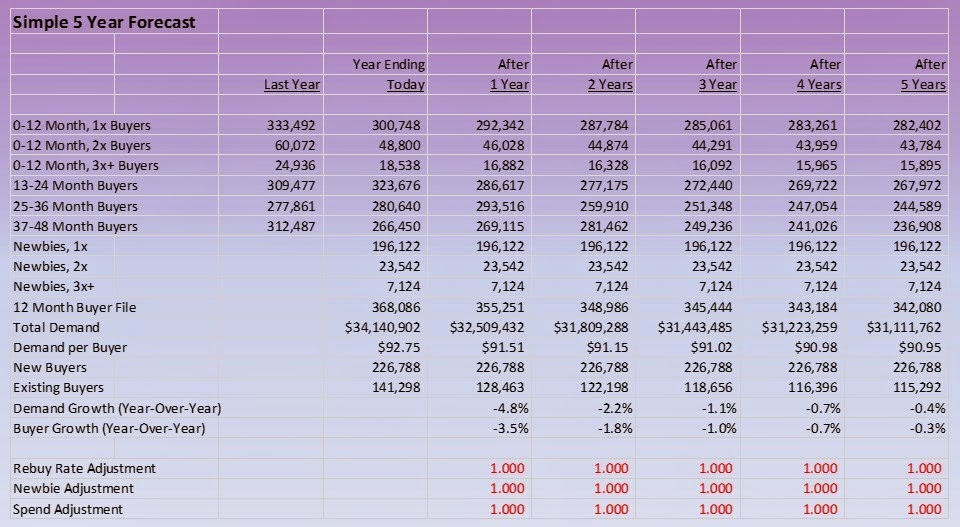 Let's go back to 1998. Seinfeld was ending a nine-year run. Will Smith was "Getting Jiggy With It". And I was the Circulation Director at Eddie Bauer. This was a job you wanted seventeen years ago - you had your hands in everything!

One of the things you had your hands in was sales planning. It was my job to determine how much demand the direct channel was going to generate, on a seasonal/annual basis. #OhBoy. Talk about a nightmare.

My team spent a week, a week mind you, estimating the sales of every customer segment in every catalog mailing. Their estimates then fed into the inventory management system, where their numbers were sliced and diced. When the inventory team made changes ("we cannot support 96 pages in that catalog - we're scaling back to 92 pages - and you need to go back and reforecast demand for the catalog and then feed the numbers back to us - at which time, we'll then go to 100 pages and you'll need to reforecast once again"), my team had to do a lot of rework. After a week of back-and-forth nonsense, the forecast was done, and was submitted to the Finance Team. That's when the criticism began. "This plan is awful, we will come up short on profit, go back and massage the numbers and find some business so that we hit our profit goals." At that time, my team added 3% productivity to every segment for no good reason whatsoever other than the fact that somebody in Finance wanted things to look that way (and we'd document exactly what we did so that when we missed plan, we could explain why).

It was an ulcer-inducing process, one that an outsider would look at and say "YOU PEOPLE ARE NUTS!" But insiders, long-term Eddie Bauer employees, these folks seemed to LIKE the process - they seemed to thrive on a process that did nothing to address the core issues with the business.

Well, after I spent hours throwing up into a dumpster outside the corporate headquarters, I decided to do something about this insane process. I created a "rapid iteration" simple forecasting process. This process forecast sales for the season/year. If we added/subtracted pages, we did so in the simple forecast, so we could see the outcome. We managed this process between myself, inventory management, and finance. We rapidly iterated on an hourly basis, to get to the answer that would be submitted to the Executive Team for approval. Then we got approval (which almost never happened, of course).

Once we had approval, my team was tasked with creating one solution, at a segment level.

Rapid iteration is critical, especially when you do not need a precise answer to twelve decimal places. The goal is to get your Executive Team to understand what is happening, to get them to understand what choices they have, and to raise issues on future sales totals long before somebody has to buy inventory to align with a fraudulent plan.
- May 07, 2015