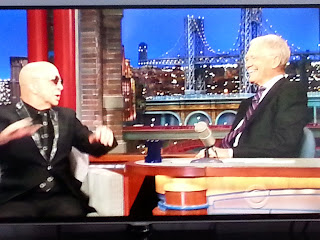 The guy was throwing watermelons off of a building. That's the kind of thing that was interesting to a seventeen year old aspiring to become a statistician. Mr. Letterman had re-written the rules of late night television.

Around the time Larry Bud Melman delivered periodic overnight comedic thrills, companies like Lands' End and L.L. Bean were re-writing the rules of cataloging. Prior to 1980, "big books" dominated the scene ... JCP, Wards, Spiegel. Five hundred pages, delivered a few times a year. Their model was upset by 124 pages mailed twelve times a year ... customers had not seen that before, content especially for them, targeted merchandise, a limited assortment (curated). Customers responded, and specialty catalogs ascended the mountain.

By the mid-1990s, Mr. Letterman was at the height of his game, competing against Mr. Leno at 11:35pm (10:35pm Central and Mountain). However, we couldn't see the future. We couldn't see how unlimited cable channels and this thing called "the internet" would fragment the audience, allowing dozens of late night hosts to have their own audience - we couldn't possibly see how somebody would create content at 12:35am so that it would go viral on YouTube a day or two later.

By the mid-1990s, catalog companies were at the height of their game. However, catalogers could not see the future, either. How could we? We couldn't see how unlimited commerce websites on this thing called "the internet" would fragment the audience (some probably did), allowing thousands of business leaders to have their own customer audience - we couldn't possibly see how a company would generate no profit for nearly twenty years and yet would be on a trajectory toward a trillion dollars in net sales by 2025 by finding a way to cope with an ever-fragmented audience (think about that one for a moment - the audience fragments, so one company finds a way to appeal to everybody - kind of like selling via a 500 page catalog without the onerous variable costs).

If you watch Mr. Letterman today, you can barely recognize what existed in the 1980s. The "World's Most Dangerous Band" was replaced more than twenty years ago by "The CBS Orchestra". No more watermelons. Still a top ten list. The spirit lives, the old-school silliness is gone. The audience aged. The 30 year old watching the show in 1985 is a 60 year old watching the show today. Younger folks don't bother. It became hard to fight against a nearly infinite number of channels.

If you read through a catalog today, you can barely recognize what existed in the 1980s. The entrepreneurial spirit has been replaced by best practices. Still 124 pages. The spirit lives, the old-school innovation was gone. The audience aged. The 30 year old purchasing from Lands' End in 1985 is a 60 year old purchasing today. Younger folks don't bother. It became hard to fight against a nearly infinite number of (omni)channels.

Mr. Letterman either quit or was forced out. He will be replaced, but the brand name goes on. Just ask Jimmy Fallon ... he hosts a show that has been on more than sixty years. The merchandise changes ... the brand lives ... the audience gets younger each time. We recycle.

Do you want David Letterman on all devices at all times?

Just this week, I analyzed a project for a company that makes full use of the co-ops. The merchandise purchased by co-op customers was fundamentally different than the merchandise purchased by customers acquired via online marketing. Run an ecosystem simulation for your business - or ask your favorite vendor to run an ecosystem simulation for you - you may well see the same thing. The co-op customer, in television terms, loved David Letterman. The online marketing customer, in television terms, loves Stephen Colbert. By maintaining strong loyalty to the co-ops, this cataloger sold merchandise in the theme of David Letterman. The cataloger is trapped - the cataloger must subsequently offer merchandise loved by the long-term core customer.

But a broad, diversified customer acquisition portfolio gives life to your merchandise assortment. You'll have enough new customers who like a different set of merchandise, causing your merchandising team to respond differently, to evolve the assortment in a manner that helps your business, long-term.

Television (a medium that may be dying or may be growing stronger, who knows) evolves the merchandise assortment on a non-stop basis, often failing, sometimes succeeding spectacularly.

Oh, I know. You'll see Mr. Letterman do a piece on CBS Sunday Morning in six months, and the old-school folks will roar with enthusiasm ... "He's back, this proves his style of humor isn't dead!!" ... much in the same way the trade journalists and consultants roar with approval when JCP decides to mail one (1) catalog.

I will miss Mr. Letterman. I already miss Mr. Ferguson. And I will miss Mr. Stewart, too, in a few months. The merchandise assortment changes - but their shows go on. I change, I go on. We can change our merchandise offering as well.
- May 19, 2015