Many retailers now post comp store sales numbers with the inclusion of e-commerce.

Omnichannel experts celebrate this as a step in the full digitization of a retail brand, silos being torn down in the hopes of serving a modern customer.

Conversely, a lot of bad data is hidden in this style of sales reporting.  For example:

Do you see what was hidden?

Retail comps are actually -5%.  Online demand is actually +40%.  The blended average is a +2.5% comp, reported to the financial community.

At that point, you have a rift in the retail profit and loss statement.

And it won't be hard to disagree with the CFO - the stores will be somewhat empty, right? In the example above, there's going to be 20% fewer people in the store.

This will create two problems.
I want for you to take a few moments, right now, and think about the consequences of the omnichannel magic you're being sold. Increasingly, the website experience is subsidizing declining store sales. At some point, website growth will slow/stop (after it finishes cannibalizes other demand sources and mobile starts cannibalizing e-commerce).

If you were CEO/CFO, would you keep a store open that is probably generating sales across all channels, but has 60% of the foot traffic that it had back in 2003?

CMOs and CFOs are always working together to kill old-school marketing channels, then noticing that sales don't decrease. Regardless of attribution methodology, stores are going to be under severe pressure, due to increasing fixed costs. Retailers with high debt loads will be caught in a trap.

This omnichannel thing is going to get interesting, don't you think? More screens, more problems!
- August 20, 2013

When people talk about email marketing, you get an "industry" view of the craft. A style of language has been crafted so that prof... 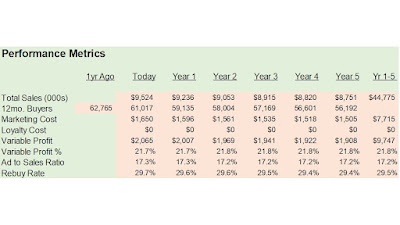