Kaley's Knits: Squeezing More Out of the Lemon

A combination of Orders per Buyer per Year, Items per Order, and Price per Item Purchased yield Annual Demand per Buyer. 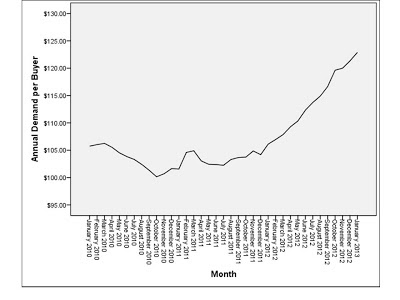 This metric has been increasing for eighteen months.  New customers fell off the cliff five months ago.  This tells us that new customer acquisition is not responsible for the change in this metric.

Clearly, Management is trying to "squeeze more out of the lemon".  A conscious decision was obviously made to get customers to spend more.  The focus of Kaley's Knits clearly shifted, in an 18 month window, from a balanced approach to one focused on trimming customer acquisition marketing dollars in favor of spending gross margin dollars on existing customers.

Why did I mention gross margin dollars?  Well, gross margin percentages are down from 59% in 2011 to 53% in 2012.  Discounts and promotions are frequently subtracted from the gross margin line.

Next time, we'll talk about the impact of this strategy on the total business.
- January 28, 2013