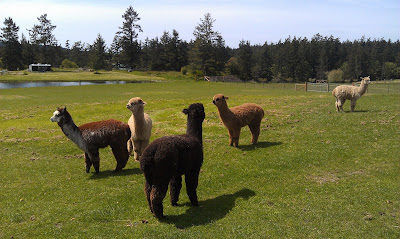 Five alpacas, all looking for a leader.

Give me a moment to tell you a story.  It's Friday, what else do you have to do?

Old school.  1998.  Eddie Bauer.  I had just been named the Director of Circulation, which, back in the day, was one of the 2 or 3 most powerful jobs in direct marketing (only CEO and Chief Merchant were probably more influential).  I made a ton of decisions.  I set the catalog advertising budget (hint, think $50,000,000 to $75,000,000 a year ... not a trivial amount).  I decided how many new customers would be acquired.  I determined how many catalog drops there were.  I determined profit cutoffs for each catalog.  I determined how many pages were in each catalog.  I decided if there was a large version of the catalog and a smaller page count, prospect version of the catalog.

Not that there weren't detractors.  A finance staffer would tell you to stop wasting money, then wouldn't buy you a new PC to implement data mining algorithms to identify ways to stop wasting money.  Your CMO demanded that you offer 20% off plus free shipping, or different prices for different customers, something that Dateline NBC didn't take kindly to.  A merchant demanded additional pages for poor-performing merchandise.  The call center wanted to avoid an in-home date around a holiday because of staffing concerns.  The parent company wanted to push credit, so you have to have a dot on the cover for credit customers.  The loyalty people wanted a dot on the cover to promote credit.  Everybody wanted a dot on the cover!  It never ended.

But that's what happens when you have accountability, that's life.

Try being accountable when there's a problem ... I was first in line to hear about it!  I can remember our CEO at the time, 6:30am, screaming at some poor soul ... "THE CATALOG ISN'T PERFORMING, I'M HEADED DOWN TO HILLSTROM'S OFFICE TO GET THIS THING FIGURED OUT!"  I say that lovingly, he was a wonderful CEO, a person I still think about.  At least I knew I had all of 30 seconds to get answers.

I loved accountability ... of course, it worked two ways ... because I had accountability, I also got to make decisions, significant decisions, decisions that almost no other employee got to make.  Conversely, I felt the heat when things didn't work.  I cut way back on customer acquisition in 1999, and when ownership felt exasperated with my decisions, I had to get on an airplane and go to Chicago and get chewed out ... absolutely chewed out ... that's an expensive way to get yelled at!

That's what accountability is all about.

Around that time, our brand marketing team wanted to make changes to the creative presentation of the catalog.  Instead of rustic, 45 year old men standing in a mountain river fly fishing while wearing jeans, they wanted a "younger customer", and would kick-start the process by featuring 25 year old men carrying kayaks, sans shirts, wearing jeans.  "We're going back to our heritage ... Eddie would want it this way!!"

I recall rolling out the strategy.  I took the productivity of my catalogs down (notice I said "my catalogs" ... that's what you do when you're accountable for something), because I didn't trust the way my customers would respond.  My inventory partner shorted the inventory buy, correspondingly, so that we wouldn't be stuck in a liquidation situation (by the way, find yourself a good inventory partner ... this person alone can alter pre-tax profit by +/- five points).

We're in a meeting to discuss the productivity of the new creative strategy.  That happens when you lose 10% or 15% of your business and there's only one lever being pulled.  You should have seen these poor brand marketing folks.  They're being assaulted from all angles for "destroying the catalog".

That's where accountability should kick in.  Unfortunately, it didn't kick in.

I remember watching the creative folks absorb a tongue-lashing that would make a Naval Officer blush ... folks crying, resumes being polished right there in the meeting.  It's one thing to see a strategy fail ... it's a whole 'nuther thing to fail and then start blaming everybody else.

There's nothing better in marketing than having accountability for business performance.

When you have accountability, take accountability.  Take the blame when things don't work, and provide glowing credit for others when your strategies work.

It's fun to have accountability.  You get to make decisions!  Too often, accountability is missing.  We outsource search, affiliates, email marketing, catalog customer acquisition, on and on an on.  Accountability ends up being the sum of a hundred cookie crumbs.  Be the cookie!  And you can do this if you're a simple analyst or an EVP.  Take control of whatever is in your sphere of influence!! 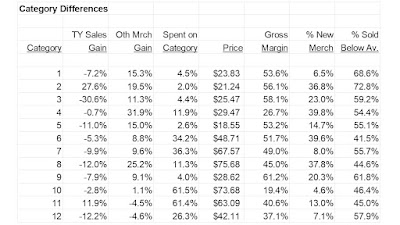