I want to walk you through a series of images from a basketball game.  The images will explain why attribution efforts fail miserably. 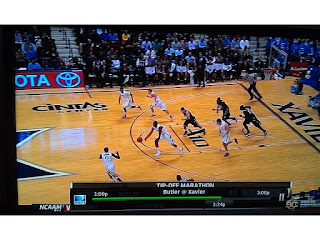 Now, we move a few seconds ahead in the action.  I positioned two arrows on the two players we are following.  The player with the ball (number "0") dribbled to the top of the key.  Next, he will pass the ball to the right wing, where his teammate is wide open.  But more important, look at the left arrow.  This is player number "4".  He has hustled down court, passing all of his teammates.  Because of his hustle, he had drawn two defenders near him.  And because he drew two defenders near him, his teammate (number "12") is wide open on the right wing. 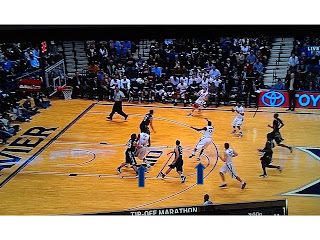 Ok, we'll look at one more image, at the end of the play. 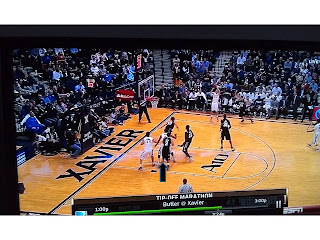 Because player #4 drew a defender close to him, his teammate on the right wing (#12) was wide open, and received a pass from player #0.  A defender rushed to the teammate (#12), blowing right past a shot fake.  Now, the teammate (#12) has a wide open three point jump shot attempt, which he buried!  The crowd went crazy, because this player hit a wide open shot that counted for three points, he's credited with one more point than he would be credited for on easier shots taken inside the three point arc.

In the box score (basketball's version of a KPI attribution dashboard), here is what is documented from this offensive series:

Player #4, who is truly the reason for the success of this offensive series, gets no credit.  In large part, he gets no credit because we don't have a measurement system to assign value to his efforts (hustle, positioning, basketball IQ, fundamentals).

Coaches, however, do assign value to his efforts.  They watch film, and can visually see his value to the team.  That's why he is playing in this game.

We, as a measurement community, will fail until we find a way to provide attribution to the activities that truly make a purchase happen (customer service, merchandise, creative).  Today, we give too much credit to channels, discounts, and promotions (i.e. player #12 and, to a lesser extent, player #4).