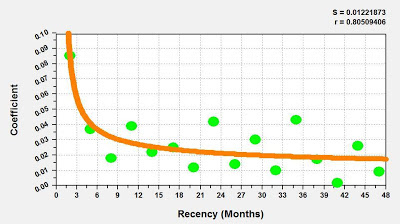 When I work on email marketing projects, I like to assign weights to historical transactions.

I run a regression analysis.  I document the coefficients for each variable.

In the graph above, I build a curve as a function of the coefficients for each recency variable.

This yields the weighting scheme I use when deciding which version of an email marketing campaign to send to a customer.  If a customer spent $100 on Womens merchandise last month, and $250 on Mens merchandise 36 months ago, I have to make a decision whether the customer should receive a Womens message or a Mens message.

In this example, the customer spent more on Mens merchandise, historically, but the purchase is 36 months ago, and therefore, less relevant to future activity.  The customer should receive a Womens message.

Clearly, these strategies should be tested, because your mileage will vary.  Regardless, in email marketing, it is important to come up with a weighting scheme, so that the most relevant messages are sent to a customer.  I've yet to run across an instance, in twenty-four years, where we make a mistake by weighting older transactions as being less important than recent transactions. 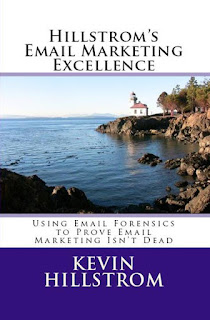