Marketing Campaign Performance: Kevin, Are You An Idiot?

After talking about different analytics "systems" on Sunday, I received a common question:
In other words, the real question is this?
Good question!

The Multichannel Forensics "system" (a derivation of the Forecasting system I described on Sunday) ignores campaign performance ... that's how it is different than what you do.

That's the kind of response I sometimes get.


The best thing that can ever happen to a marketing/analytics professional is to work at a company that is failing, or to work for a channel that is failing.  For me, Lands' End 1995, Eddie Bauer 1998, Nordstrom 2001, or consulting work for 70% of current catalog brands qualifies.  Online marketers cannot relate to failure, for even during the Great Recession, online sales generally grew as online cannibalized existing channels.  Other marketers, however, are well-versed in failure.  Failure changes everything.

When you are failing, you evaluate every campaign, looking to unearth the reason why a business is failing.  When you do this, you learn critical truths about customer behavior.
In other words, marketing campaigns are little more than a big game of "whack-a-mole". 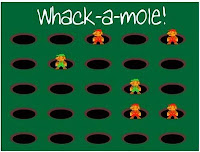 Look at this grid.  Each hole represents a marketing campaign.  Each mole represents success.  In total, you see six "successes".


When your business is failing, you notice that no matter what you do, no matter how hard you try, you're going to be stuck with six successes, total.  That's it.  Two things make the problem worse ... the six successes aren't necessarily predictable/repeatable, year-over-year, and overall, every campaign is 5% or 10% worse than last year.


In other words, it's very, VERY hard to fix a business by fixing campaign performance.


The Multichannel Forensics "system" instead seeks to identify changes in customer behavior over time, using rolling twelve month metrics, annual repurchase rates, annual orders per buyer, annual spend per order, migration probabilities across channels, and five-year sales projections to identify "what customers are really doing", to identify "what is really working and what is not really working", across channels, across merchandise divisions, across brands.

As is my tradition, I'm going to take a long weekend. No posts until early next week. I've been doing this for almost twenty years, ...